The Dunwoody Wildcats successfully defended their 2016 DCSD Wrestling Championship with a close 220-203 win over Marist.

Three gold medals went to the Wildcats led by Jacob Starks picking up the win at 113 over defending champion Qadir Romero of McNair. Starks moved up to 113 this year after picking up a silver at 106 in 2016.

Tommy Jackson gave the Wildcats back-to-back gold medals in the 182-weight class as he got the victory against Terrance Randle of McNair.

Constantine Gavalas won gold at 170 in 2016, but moved up to 195 this year where he defeated defending champion Kamal Feracho of Lakeside in the finals.

Lakeside came in third in the team standings with 177.5 points to move up one spot from a year ago. Matthew Watkins led the way by moving up two spots from his bronze medal in 2016 at 145 to taking the gold over Corey Langner of Marist.

Gordon Lewis aided the Lakeside cause with his second consecutive DCSD gold medal in the 285-weight class. Lewis knocked of Dearies Wilson of Decatur for the gold.

Southwest DeKalb had a strong showing despite coming up short on gold medals led by Jamal Gibbs silver medal in the 152-weight class. The Panthers picked up five bronze medals to rack up points to finish fourth overall with 166 points. 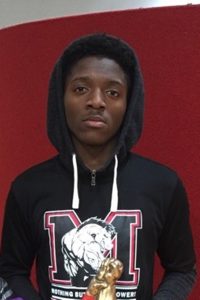 McNair finished fifth in the standings with 150.5 points led by gold medal finishes from Masud As-Siddiq (120) and Jamie Jinks (160). As-Siddiq was also named the Williams S. Venable Award winner for best all-around wrestler at the event.

Druid Hills finished sixth in the team standings behind a pair of gold medal victories from Jack Elliot Floyd (152) and DeShaun Baker (220).

Decatur picked up a pair of gold medals as Zach Thompson jumped from a fourth-place finish in 2016 to win the 106 weight class this year and Kaden Spann following up his 2016 gold at 120 with the gold at 126.

St. Pius’ Jack Marsh rounded out the gold medal winners with his victory at 170.