Miller Grove’s Naquante Hardy finishes off a steal with a dunk on the way to a 25-point game in the Wolverines’ win over Southwest DeKalb. (Photo by Mark Brock)

The No. 6 ranked Miller Grove Wolverines rallied from down as much as 11 points in the first half to improve to 7-0 in Region 5-5A action with a 61-52 win over the Southwest DeKalb Panthers at the “Purple Palace” on Friday night.

George Wilson’s three-pointer to open the second half pulled Miller Grove (12-6, 7-0) even with the Panthers for the first time in the game at 24-24.

Kevin Paige had a pair of free throws and a layup as the Wolverines took the lead for good at 32-29.

Mandarius Dickerson and Kadarius Johnson struck again from the three-point line to pull Southwest within 38-35 with 1:23 left in the third quarter. Miller Grove’s Jalen Mason sent the Wolverines into the fourth quarter up 41-35 with a three-pointer of his own.

Southwest would take advantage of 5 Miller Grove turnovers as they began to rally. Dickerson and Johnson would fuel the rally with 5 and 4 points, respectively, before Hardy would heat up again for Miller Grove. Hardy would score the next 9 points for Miller Grove including a reverse layup with 56 seconds to play for a 59-52 lead.

Harvey and Mason both hit a free throw in the closing seconds for the final of 61-52.

The Panthers got off to a quick start against the Wolverines striking from three-point range with two by Dickerson in the first quarter on the way to an 8-2 advantage.

Southwest answered a quick five points on a steal and dunk and a three-pointer to end the first quarter by Miller Grove’s Naquante Hardy with more outside sharpshooting to open the second quarter.

Johnson hit a three from the right corner and Darius Hogan hit a pair as the lead ballooned to 11 (23-12) with 2:21 left in the first half.

Hardy keyed a big rally to end the half with 7 of his 12 first half points coming in the final 1:16 of the second quarter. A steal ended up in a three-point play for Hardy who followed with a pull up jumper and a drive to the basket with 11 seconds remaining to cut the lead to 24-21 at the half.

The Wolverines got a game high 25 points from Hardy. Johnson finished with 16, Dickerson 14 and Hogan 10 for the Panthers. 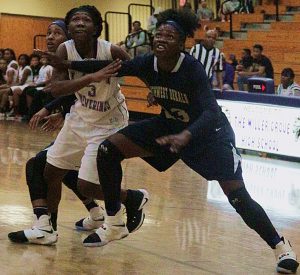 (G) SW DeKalb 61, Miller Grove 29
The No. 3 ranked Southwest DeKalb Lady Panthers took advantage for 41 turnovers to roll past the Miller Grove Lady Wolverines 61-29 to improve to 9-0 in Region 5-5A play.

Texas A&M signee Jada Walton had eight points in the first quarter, including the final six to get the Panthers out to a 14-6 lead.

Southwest had seven turnovers in the third quarter, but again took advantage of 12 by Miller Grove to extend the lead to 48-33 by the end of the period.

Walton had six more points in the third while Benefield and Lanee Edwards added four each. Miller Grove’s nine points all came on three-pointers by Kashuna Patterson who would score all 15 of her team’s points in the second half.