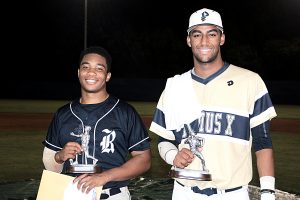 Despite a lightning delay and some rain showers, the West Senior All-Stars jumped out to a 7-0 lead on the way to an 8-2 victory over the East squad in the 14th Annual DCSD Senior All-Star Baseball Classic at the Georgia State Baseball Complex on Tuesday.

The win gave the West a sweep of Junior and Senior All-Star games and the West Seniors evened the series with the East at two games apiece since the format changed to the East vs. West matchup in 2013.

St. Pius’ Garrett Gooden meanwhile struck out five and allowed 2 hits and one walk in 2 2/3 innings before the lightning delayed the game for over an hour. Lakeside’s Jaret Barr made a pinpoint throw to the plate to cut down Stephenson’s Corey Forde at home as catcher Drew Hinton made the tag to keep the game tied at 0-0.

After the delay, Columbia’s Charlie Johnson entered the game to pitch and struck out the first batter to end the top of the third with the West still holding a 2-0 lead.

Columbia’s Jamari Johnson started the bottom of the third with a walk and stole second and third before Decatur’s Jalen Sprull doubled to increase the lead West to 3-0.

Sprull would steal third and score on a wild pitch and Lakeside’s Drew Hinton would hit a two-out single to plate Barr to make it a 5-0 lead after three innings of play.

Johnson’s ground out to the short stop scored a run in the top of the fourth and pinch-hitter Shaquille Hickson of McNair drove in Johnson as the lead ballooned to 7-0.

The East got on the scoreboard in the top of the fifth on a RBI single by Redan’s Walter Jordan and an error on the West that allowed Clarkston’s Jayson Harrell to score as he stole third.

Decatur’s Boyd Brim gave the West an insurance run with a RBI single in the bottom of the fifth to plate Druid Hills’ Curtis Jamerson to make the final of 8-2.

Gooden was named the West MVP with his 2 2/3 innings of scoreless time on the mound while Jordan took the East MVP honors with his 2-2 performance as the only batter to pick up more than one hit in the game.

Columbia’s Jamari Johnson set a new record for steals in the All-Star Classic with three on the night to break the record of two held by numerous participants.