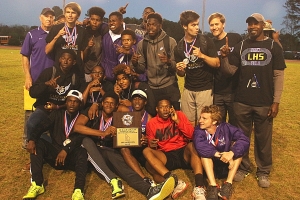 The Lakeside Vikings tasted victory in the DeKalb County Track and Field Championships for the first time since 1974 with their 107.5-89 win over the Cedar Grove Saints on Monday at Godfrey Stadium.

The Class 3A defending champion Saints held a slim 3.5 point lead (46-42.50) after the first day on Saturday, but the Vikings took over the lead for good on the first event Monday with a third place finish in the 4×100 relay.

The Vikings ran a full one second faster (42.36) to pick up 6 points to Cedar Grove’s 2 in the event won in a record setting time of 40.73 by Southwest DeKalb’s team of Marcellus Boykins, Terry Conwell, Terryon Conwell and Jaylan Muhammad. Southwest broke the record of 40.90 set by Miller Grove in 2009. 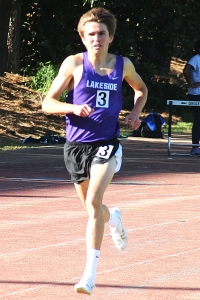 Lakeside’s Andrew Kent doubled up on gold medals with wins in the 1600 and 3200 meter runs. (Photo by Mark Brock)

Freshman phenom Brian Herron added 10 more points to the Lakeside total by upsetting defending champ Terry Conwell of Southwest DeKalb in the 400 meter dash finishing with a time of 46.99 (1/100th of a second off the county record).

Herron would go on to take silver in the 200 (21.45) finishing between the twin duo of Terryon (21.16) and Terry Conwell (21.67) as the Vikings maintained the lead over Cedar Grove and Lakeside.

Terryon’s win in the 200 gave him a sweep in the 100 and 200 meter dashes for the second consecutive season as he took the 100 with a time of 10.46. Cedar Grove freshman Israel Spivey took third in the 100 as the Saints continued to hold on to second place in the standings. 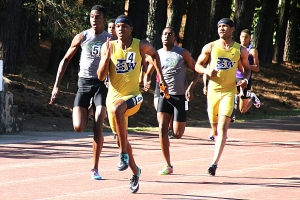 Southwest DeKalb came within a the time it took to pick up a dropped baton to setting its second record of the meet as a bad exchange on the final leg of the 4×400 relay slowed down Jaylan Muhammad just enough to prevent the record breaking time. The Panthers still ran a 3:17.48 to win by almost three seconds over Lakeside (3:20.42).

Cedar Grove’s 4×400 team finished third to hold off Southwest for second place in the meet.