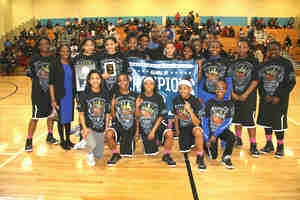 The defending champion Stephenson Lady Jaguars entered the title game against 15-1 Cedar Grove undefeated at 16-0 and came away with 43-38 victory to claim the program’s second consecutive county championship. 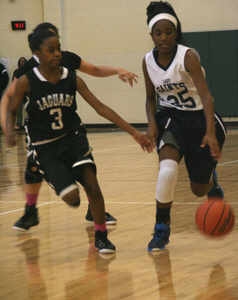 The Lady Jaguars (17-0) opened up the game limited Cedar Grove to just three first quarter points and Laniya Campbell’s basket before the end of the quarter gave Stephenson 14-3 advantage.

A three-point play by Kassidy Broussard made it 17-5 early in the second quarter before the Lady Saints (15-2) went on a 12-0 run to tie the game. Natoria Hill had eight points, including a three in the run, and Ya’ria Sanders drive to the basket followed by two free throws knotted the game at 17-17. 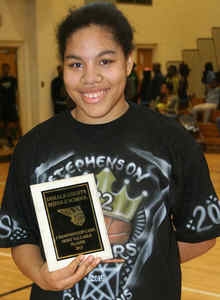 Tournament MVP Kenndey Larkins had four points as Stephenson rebounded to take a 24-17 lead at the half.

Cierrah Sandler’s rebound and put back midway through the

third quarter pulled Cedar Grove within 29-26. Stephenson answered as Kennedy Larkins basket started a 9-4 run to end the quarter and Ja’Miyah Culbreath hit a three to finish the quarter with the Lady Jagurs up 38-30. 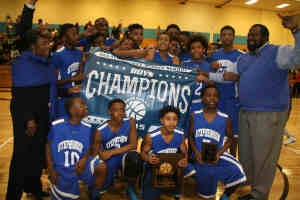 The two teams split regular season meetings as Region 3 rivals with Miller Grove getting the regular season region title and were meeting for the third time this season in the title game. 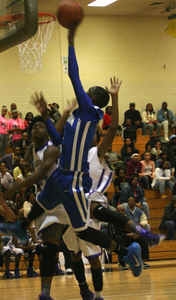 Stephenson’s Jamir Chaplin (blue) gets inside against a pair of Miller Grove defenders.

with back-to-back baskets for a 4-0 Stephenson lead on its rival Miller Grove. After a Main Means basket for Miller Grove trimmed the lead to 4-2, Justin Harris and Chaplin hit three-points to power Stephenson to a 10-2 advantage.

Rondell Dean’s layup at the end of the quarter pulled the Wolverines (14-3) to within 14-11 heading into the second quarter.

Both teams struggled offensively in the second quarter, but the Jaguars picked up nine points, six from Trayvon Ford and a three from Harris to extend the lead to 23-15 at the half.

Edwards hit a pair of free throws late as Miller Grove closed the gap to 29-23 heading into the fourth quarter. 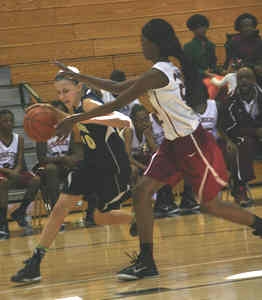 Renfroe took an 8-7 at the end of the first quarter as Emily Seats-Jordan hit all three free throws with one second left on the clock after being fouled on a three-point attempt before the buzzer.

Asya White hit one of two from the line and drove for a basket to start the second period to put Champion (16-1) ahead for good.

Dylan Andrews two free throws closed the gap to 18-14 with a pair of free throws before the half.

Champion got a basket from Kayda Pruitt to open the second half for a 20-14 lead, but Kate Taylor’s offensive rebound for a basket cut the lead to 20-17. Champion answered with a 7-1 run to end the quarter, including a late three-pointer by Kayla Wimberly to take a 27-18 lead into the fourth quarter.

Renfroe (12-5) turned up the defense in the fourth quarter limiting Champion to just three points by Kennedy Manning (basket and 1 of 2 from the line) while hitting 6 of 8 from the line, including 3 of 4 by Kenya Oliver, to cut the lead to 29-24.

Lauren Smith’s basket late was the last score of the game to pull Renfroe within the final margin of 30-26. 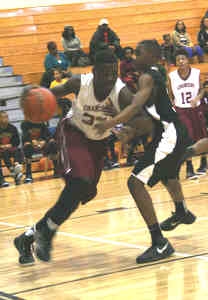 Boys’ Consolation
Champion 64, Lithonia 27
The Champion Chargers used a 24-0 run during the their quarter to knock off the defending champions Lithonia Bulldogs 64-27 to take third place in the Boys’ Championships.

Lithonia (10-7) jumped out to a 10-1 lead in the first quarter behind the play of Keven Brantley and Brieon Rockliffe who hit for four and three points, respectively.

Brantley’s basket early in the second quarter gave Lithonia a 12-3 advantage before Champion started with the pressure defense to turn the game in its favor. Devin Longstreet was part of the second quarter turn around as he scored seven points, four on steals for easy baskets, including one to end the half with Champion ahead 20-17.

Then after the half came the big explosion as the Chargers turned a 22-18 lead into a 46-19 advantage as the quarter ended. The 24-0 run was sparked by Nate Ogbu’s 10 points, including a pair of three pointers, and six points each by Longstreet and Tworn Seals. Meanwhile, Lithonia manages just two points (two free throws) in the period as the game got away.

Devin Longstreet finished with a game high 15 points and 8 rebounds to lead Champion while Nate Ogbu and Tworn Seals finished with 10 points each.