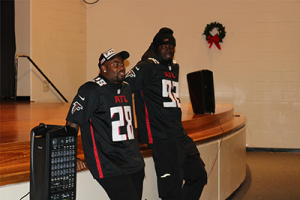 Former Stephenson and current Atlanta Falcons running back Mike Davis and his teammate, linebacker Adetokunbo Ogundeji, stopped by his alma mater to chat with players and answer their questions. Davis graduated from Stephenson in 2012. He led all running backs in DeKalb County School District (DCSD) with 1,928 rushing yards and scored 21 touchdowns during his senior season. He was also on the track and field team.

He continued his academic and football career at the University of South Carolina, where he rushed for 2,440 yards and scored 22 touchdowns in three seasons. He was drafted into the NFL in 2015 in the fourth round by the San Francisco 49ers. He had also played for the Seattle Seahawks, Chicago Bears, and Carolina Panthers before signing with the Atlanta Falcons prior to the 2021 season. He has 338 rushing yards and two touchdowns, as well as 197 receiving yards and one touchdown reception so far this season. 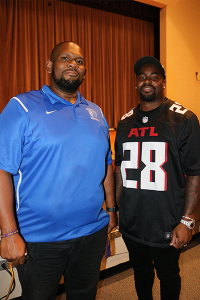 Davis shared his journey with the student-athletes from his time at Stephenson to where he is now as an NFL running back. He discussed the 5 a.m. workouts that he participated in as a player at Stephenson and how he worked hard on the gridiron and in the classroom. He stressed the importance of focusing in the classroom and having good grades.

“Grades are more important. You can’t play football without the grades,” Davis said.

Davis said it feels amazing to be back at his old high school and share his story with students who are sitting where he once sat.

“They have that same opportunity to go do whatever they want to do,” Davis said.

Davis’s visits came the same day that it was announced that he is the Falcons nominee for the Walter Payton NFL Man of the Year Award. The award recognizes an NFL player for his excellence on and off the field. The award was established in 1970 and was renamed in 1999 after the late Hall of Fame Chicago Bears running back, Walter Payton. Each NFL team nominates one player who has had a significant positive impact on his community.

According to the Atlanta Falcons, Davis has hosted events in metro Atlanta through his foundation, The Mike Davis Foundation of Hope. Those events included a free youth football camp for more than 200 kids on the Westside of Atlanta this summer and a back-to-school shopping spree for kids in need to ensure they were prepared for the school year. 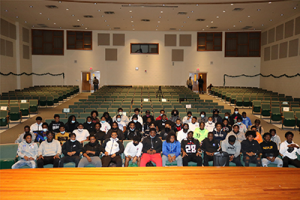 Former Stephenson High School football coach Ron Gartrell delivered the news to Davis of his nomination for the Walter Payton NFL Man of the Year Award. Stephenson principal Michael Jones said he was not surprised that Davis was nominated for the award. Jones said Davis has been giving back to Stephenson and the community since his rookie year in the NFL.

“When Mr. Davis got to the NFL, one of the first things he did was give a scholarship back to the school. With the criteria, he wasn’t looking for the student with the highest grade point average. He said the person had to come from a single-parent home. That says a lot about him and his character. I wouldn’t be surprised if you win [the Walter Payton NFL Man of the Year Award]. I just want to thank you,” Jones said to Davis.

Davis said the one message he will give to all DCSD student-athletes is to never give up.

Vietnamese
Our Spring Sale Has Started

You can see how this popup was set up in our step-by-step guide: https://wppopupmaker.com/guides/auto-opening-announcement-popups/

Due to inclement weather and the potential for black ice and unsafe road conditions, all DeKalb County School District schools and administrative offices will be closed. Remote learning will resume on Tuesday, February 16, 2021.