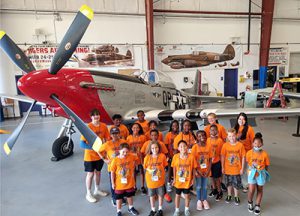 “The [Federal Aviation Administration] just came out with a job announcement that they are looking for air traffic controllers, and that’s a job that these students wouldn’t know about. Even when we go out on our field trips, and we visit airports, they can see the ground crew and many different careers in aviation that they were not aware of before,” Davis said. “Yes, they can become Lockheed engineers, but there are opportunities that they may not be aware of that don’t require a college degree.” 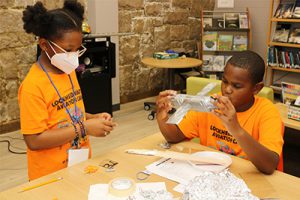 “We got to tour the airplanes they had in the hangars,” Button said. 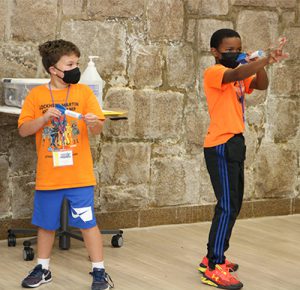 The Commemorative Air Force Museum, located in Peachtree City, has several aircraft engines on display, including models of U.S. carrier aircraft from World War II. The field trip and camp were an eye-opening experience for Evansdale Elementary School fifth-grader Hosea Reaves, Jr., who loves planes and other flying vehicles.

“I like airplanes because they are a way that humans travel through the air and to space,” Reaves said.

The camp ends with a Junkyard Wars competition. Campers used what they learned about aviation and worked in small groups to design and build an airplane using materials they purchased in the camp’s “junkyard.” Planes were judged based on three criteria: time in the air, how straight they flew (distance from center), and flight distance.

Along with learning about aviation careers, Davis said she hopes students come from the camp knowing that science and learning are fun.