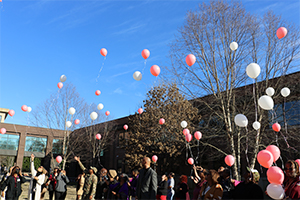 Those were just some of the many ways the Tucker High School family described the larger-than-life persona that was Mrs. Carolyn Collins, 58, who succumbed to illness on December 28 following a gallant, brave fight.

Some of Collins’ coworkers gathered on January 10 in the school’s courtyard to release pink and white balloons in her memory. While reflecting on life after an individual pass, it’s customary to remember the good times fondly. But in the case of Mrs. Collins, the good memories are simply a tangible, vivid reflection of a person whose life’s work revolved around helping others—especially children in need.

A widely recognizable fixture at Tucker High, she officially served as a custodian, but her role was so much more than any of the responsibilities listed in a job description.

It all began with the death of her son following a home invasion. She turned her spirit and her talents into helping others after encountering some students who were homeless. In 2014, these types of philanthropic efforts led to the opening of a “care closet”—literally a closet in the school’s cafeteria—to assist students and families needing clothes, school supplies, food, or other needed items. Initially buying items out of her own pocket, this sanctuary resource soon became known as “Carolyn’s Giving Closet.”

“She came to us one day and said, ‘Mr. Jackson, I want to start this clothing closet’,” said DeKalb County School District Athletic Director James Jackson, the principal at Tucker High when Mrs. Collins was hired. “She saw in her heart to help out kids who were unable and did not have what other kids had. That’s a gift within itself. She could have just done her job and gone home, but she didn’t. She decided to give back to kids and families who really needed her.”

Local media began highlighting Mrs. Collins’ generosity, and it caught the attention of comedian and entertainer Steve Harvey, who featured her on his show, The Steve Harvey Show, in 2018. Harvey surprised her with a $5,000 shopping spree to Sam’s Club and an additional $10,000 to keep the closet stocked with items. She also flew out to Los Angeles to appear on the show.

“I’m trying to do whatever it takes to take care of these kids,” Mrs. Collins told Harvey during her interview.

And did she ever. 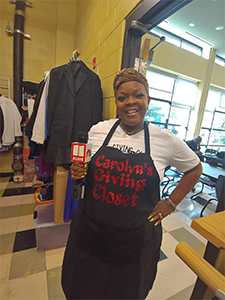 Not even a cancer diagnosis in 2019 could interrupt her selfless service to her school, students, coworkers, and community.

“That’s another testimony because most people don’t come to work when they’re feeling just fine,” Mr. Jackson said. “She was sick, and she still came to work, and that means a lot.”

Although she didn’t know Mrs. Collins personally, DeKalb County School Board Member Mrs. Whitney McGinniss attended the balloon release ceremony to remember and celebrate her inspirational life. She was touched by the philanthropy of Mrs. Collins, having assisted with the Laurel Ridge Elementary School’s clothing closet and food pantry while serving on the PTA there.

“The tireless work of Mrs. Collins should be honored because there are a lot of students who come from disadvantaged backgrounds and need extra help and extra support. Opening a clothing closet is the perfect expression of us coming together as a community to support those families that are struggling financially,” Mrs. McGinniss said.

The school says Mrs. Collins’ legacy will continue as her family plans to continue her work with “Carolyn’s Giving Closet.” Dr. Eric Parker, Tucker High School’s current principal, said he and the entire school community are thankful for the life of Mrs. Collins.

“She leaves behind a legacy of giving, kindness, and charity. She was someone who always had a smile and a positive word for everyone,” Dr. Parker said. “We’re thankful for her. Her legacy will continue to live in us, in Tucker High School, and in everyone that she has touched.”

For more on the life and impact of Mrs. Collins, see: