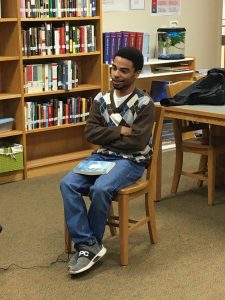 Not only will he graduate in May with a high school diploma and associate’s degree, but Siddeeq will graduate knowing he has a bright future as an author after publishing his first book. He published his first novel, “The Buried Laboratory,” through a Metro-Atlanta company, BookLogix, after winning the 2017 Young Writers Contest. He was the first male winner of the contest.

“The Buried Laboratory” is a story about a teenage boy, Rouk Sabree, who was a subject of an uneventful study designed to pull an extra-dimensional being into the physical world, but has lived his entire life being completely, slightly above average.

With the advancements of science, however, “slightly above average” will not be enough to combat the threats soon to engulf the planet. Unable to understand what is happening to him, Rouk alone is equipped to face these dangers. Yet what can he do when the only ones who understand the changes occurring within him are also those who seek to destroy everything he loves.