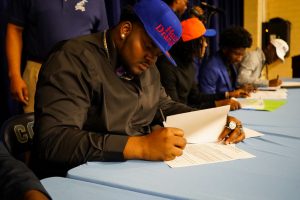 Offensive tackle Broderick Jones will go from being a Lithonia Bulldog to a Georgia Bulldog.

Jones, a five-star recruit, signed with the University of Georgia during National Signing Day on February 5. He was one of more than 60 DeKalb County School District high school senior football players to sign letters of intent during the unofficial holiday.

Jones, who is ranked as the No. 2 offensive tackle in the nation by recruiting websites, selected Georgia over Arkansas, Auburn and Illinois. 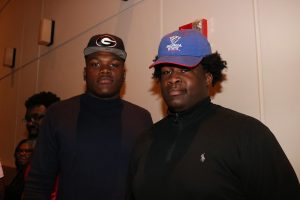 “I’m a Georgia boy,” Jones said. “I wanted to stay close to home so that my family can be able to come and support me. That was one of the biggest factors.”

Jones is joining Columbia High School defensive lineman Nazir Stackhouse at Georgia, who signed with the Bulldogs during the early signing period in December. Eight other schools hosted ceremonies on National Signing Day including 2019 Class 3A state champions, Cedar Grove High School. DCSD will have students in college football programs as far south in Miami, as far east in Massachusetts and as far west in Colorado.