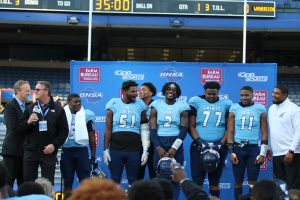 The first half of the game was scoreless until Cedar Grove found the end zone before halftime. A 12-yard run by quarterback Austin Smith led to a two-yard touchdown run by Smith to give the Saints 7-0 lead.

In the fourth quarter, a 17-yard touchdown pass from Smith to wide receiver Rashod Dubinion gave Cedar Grove a 21-7 lead with 9:43 remaining in the game. With 1:18 remaining, Crisp County blocked a Cedar Grove punt and Laravious Walker returned it for a 27-yard touchdown, cutting the Saints’ lead to 21-14.

Crisp County tried an onside kick following the touchdown, but the ball was recovered by Cedar Grove’s Sam Pittman, sealing the victory and the second consecutive state title for the Saints.

The state title was also the third title for the program in four seasons, and the first under first-year head coach Miguel Patrick.