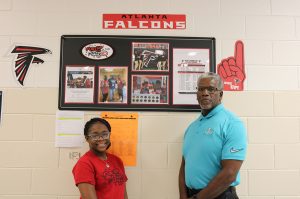 The school’s Fuel Up to Play 60 program, led by algebra teacher and former NFL player Michael Harris, won the Super Sleep Contest. The contest was hosted by Sleep Number, the smart bed company, and nonprofit organization GENYOUth. The organizations challenged students nationwide to showcase the super things their schools can do when everyone gets quality sleep, for a chance to win a Sleep Number 360 smart bed.

Chapel Hill students in the Fuel Up to Play 60 program created a commercial that showcased their peers explaining the benefits of a Sleep Number 360 smart bed. Harris said the students worked diligently on the commercial.

“We split [the contest] between sixth grade, seventh grade and eighth grade, and whoever had the best commercial—which was voted on by parents—would be the entry,” Harris said.

Washington said it was exciting to win the contest.

“I worked really hard to win it,” she said. “It takes a lot of hard work and dedication to win it.”

Washington said she will give the bed to her parents.

“They work really hard, and they deserve extra sleep,” she said.

“They have given us $4,500 to repaint the cafeteria lines, do a mural on the wall and put up fathead stickers on the wall to recognize it as an Atlanta Falcons Fuel Up to Play 60 [team],” Harris said.

Washington said she joined Fuel Up to Play 60 to be active in an after-school activity.

“When I was in sixth grade I really didn’t have after school activities to join, so I joined Play 60 so that I could have something to do and also learn how to be healthy,” she said.

Outside of winning contests, Washington and the other students play flag football and make to-go smoothies for students as a healthy snack options.