School partnered with company for its Secret Snowman gift giveaway 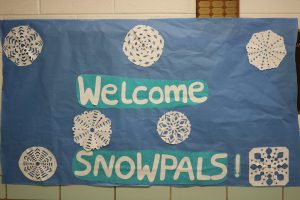 Smiles of happiness and excitement were on the faces of students at Avondale Elementary School on December 18 after they received holiday gifts from secret SnowPals.

The school partnered with Salesforce, a software company in Atlanta, for its first Secret Snowman gift giveaway. A bus load of Salesforce employees came by the school to deliver gifts to each students.

Principal Dontae Andrews, Ed.D. said the partnership with Salesforce came together through a parent who has a connection with the company.

“Salesforce has done this in the past and she was interested in bringing this to Avondale,” Andrews said.

Avondale PTA President Stephanie Cain said parents were excited about the opportunity for students to be recipients of the gift giveaway.

“Once we found out that our school was selected we were ecstatic,” Cain said. “Also, I love the fact that each child had to write a letter in order to get a gift. That alone helped with their writing skills and with their communication skills. As an [International Baccalaureate] school, being a communicator is one of our IB traits. So, we were very excited about that, and about the opportunity to expose our children and school to new things was something that we couldn’t pass up.”

Avondale students wrote a holiday wish list to their secret SnowPal at Salesforce. With Avondale being a Title 1 school, Andrews said the gift giveaway was very special. 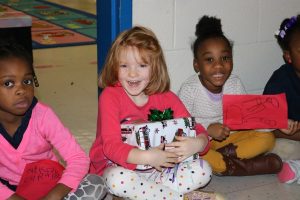 “We have a lot of students who are underserved, and so, being able to receive a gift and have their dream come true on what they want for Christmas is really special,” Andrews said.

Students lined up outside of their classrooms and were hand-delivered a gift from a Salesforce employee. Students cheered as they showed off their new Barbie doll, action figure, remote control car, doll house and books to one another.

“We appreciate the parent connecting us with [Salesforce] because it allows the students, who may not have to opportunity to receive gifts this season, to get some things that they wanted,” said Assistant Principal Candace Sagers, Ph.D.

Cain said she also hopes students learned the importance of giving during this event.

“It really is better to give than to receive, especially this time of year when a lot of people think about those who are less fortunate,” Cain said. “[The students] are blessed that they’re each getting a gift. I think the message is to be grateful, and when they become successful to pay it forward and back to another person.”