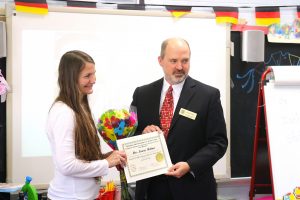 For Laura Miltner, a dual-language immersion German teacher at Ashford Park Elementary, January 29 began just like any other: students filed into class and got to work. Much like the previous Monday, they went to lunch and returned with a regained sense of energy.

Around 1 p.m., however, Miltner’s class briefly transformed into a celebration.

Miltner—known to her students as Frau Miltner—was selected as the Georgia Department of Education’s World Language Educator of the Month for January 2018.

Wallace lauded Miltner’s five-year dedication and commitment to world language education as well as her effectiveness. 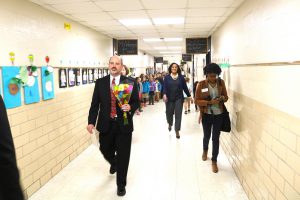 “Every school day, nearly 3,000 world language educators enter classrooms all across our state and passionately engage with the learners under their care,” Wallace said. “They provide them with a cultural and linguistic experience that will benefit their future lives. Truly, without the selfless and dedicated service of teachers like [Miltner], children would not be complete.”

Wallace also read aloud a letter that was penned by an Ashford Park parent that led to Miltner’s nomination and selection.

“Frau Miltner has the herculean task of getting 52 kindergartners to begin understanding and speaking German,” the parent wrote. “Unlike traditional two way, dual-immersion programs, we do not have half a class already speaking the target language. From the first time she speaks with a child, the only method of communication is German. By using her creativity, hand motions and exaggerated expressions, she is able to get the ideas across. She does it without overwhelming the children and building an enthusiasm for school. Children complete kindergarten with a mastery of the core subjects while speaking a new language. While all of our teachers are fantastic, the work Frau Miltner takes on to get these children ready for a more demanding academic load should be recognized.” 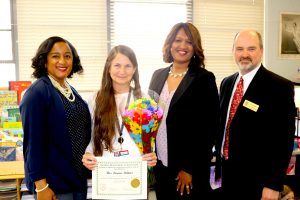 “And we agree,” Wallace said.

According to McMillan and Edwards, Miltner’s hardworking attitude sets her apart from her peers.

“She goes above and beyond the normal work day,” Edwards said.