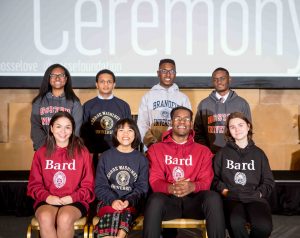 Eight students from DeKalb County School District (DCSD) have earned full-tuition paid trips to some of the most prestigious colleges in the country thanks to one local nonprofit organization.

Students from seven DCSD high schools—including one charter school specializing in educating individuals on the autism spectrum—have been named Posse Scholars for the 2018-2019 school year. As recipients, the scholars will receive full tuition at a college or university of their choice for up to four years.

“I am so proud of our students and the many new and different ways they demonstrate success and innovation,” said Superintendent/CEO Dr. R. Stephen Green. “Through a high school career filled with hard work and dedication, these students have proven they are among the cream of the crop in metro Atlanta—and beyond. Remember their names, for they have distinguished themselves as tomorrow’s leaders. Congratulations to these eight students for showing there is no limit to learning! You inspire us all.”

Each student enjoyed an official recognition ceremony on January 10 at the Fox Theatre in downtown Atlanta.

According to the Posse Foundation, the scholarship is rooted in the belief that a small, diverse group of talented students—a “posse”—can serve as a catalyst for individual and community development.

“As the United States becomes an increasingly multicultural society, Posse believes that the leaders of the 21st century should reflect the country’s rich demographic mix,” reads the foundation’s mission statement. “The key to a promising future for our nation rests on the ability of strong leaders from diverse backgrounds to develop consensus solutions to complex social problems. Posse’s primary aim is to train these leaders of tomorrow.”

The Posse Foundation began seeking talented students in Atlanta circa 2007 with help from The Arthur M. Blank Family Foundation. The organization has recruited students nationwide for 30 years. Each scholar goes through a lengthy selection process, consisting of nominations, written references, and more.

The eight students, their chosen colleges and universities, as well as their respective schools, can be found below: