Signing Up for Tomorrow’s Challenges

It starts with a dream. It ends with a gathering of loved ones, friends, peers and mentors cheering your name, dancing to music, and celebrating a shared vision for the future.

Close to 90 DeKalb County School District (DCSD) football players committed their futures to college programs on Feb. 7 as part of National Signing Day 2018. Throughout the district, school communities came together to wish outgoing players well as they announced which colleges and universities they will be attending.

Approximately 30 of these signings came from Tucker High School and Stephenson High School, which are two of the most successful programs at DCSD.

Stephenson football coach Ron Gartrell, who has been the school’s only coach since its opening in 1996, has helped more than 200 athletes pursue athletics at the college level. According to DCSD Athletic Director Mark Brock, under Gartrell’s guidance, Stephenson is second in the state with former players on college football rosters.

“It’s all about hard work and dedication,” Gartrell said. “It’s about getting these young men to buy into what we do. We emphasize academics, discipline, and hard work—those are the things we grind on all year. And we have been successful.”

Gartrell said Stephenson’s football climate is “as good as you can be.” He said he hopes this year’s graduating class continue to succeed and keep their accomplishments in perspective.

Jalil Irvin, a Stephenson offensive lineman who signed with Auburn University, said his time at Stephenson was key in developing him as a football player as well as a person. He said the coaches instilled in him a sense of how to be accountable for himself and stay focused on his future.

“I really developed on and off the field here,” Irvin said. “I can’t thank the coaches enough for what they have done for me. I ended up with 20 plus offers of four-star prospects, so it’s just a blessing. I wouldn’t be here without them. The coaching is the secret—just listening to them helps you go far. The proof is in the pudding.”

“They can best develop me as a person on and off the field,” Irvin said. “I felt the most comfortable there. It’s a nice, calm community and they’re pretty good on the football field as well.”

Tucker High School is not far behind Stephenson in terms of leaving a legacy. Tucker is currently ninth in the state for producing quality college football players, including two in the Ivy League in the past 15 years. The school had 17 signees on Feb. 7 alone—the most in DCSD for the 2017-2018 school year.

Head coach and athletics director Bryan Lamar said he hopes the signees keep their minds on the future and remain humble. According to Lamar, only six percent of high school football players obtain a college scholarship with an opportunity to continue playing.

“It’s a great day for these 17 young men,” Lamar said. “It’s a privilege, an honor and a blessing to be able to sign for a college scholarship. It’s something that people easily take for granted.” 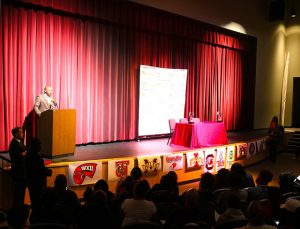 Lamar said the greater goal—receiving a quality education with little to no cost—should always be at the forefront of a signee’s mind.

“Football is going to end for every single player—I don’t care who you are,” Lamar said. “For all the guys who get inducted in the hall of fame, as great as they were, football is over for them. No matter how good you are, it will end. The question then, is, ‘What am I going to do next?’”

Lamar said National Signing Day is just the start of a post-high school career that truly shapes the lives of young men throughout the country. He said Tucker High provides a great foundation for students moving on to the next level in terms of guidance and navigation.

“There are a lot of players throughout this country that are signing letters of intent who will never step onto the football field,” Lamar said. “Some guys, with the decisions they make, will cost them their opportunity to ever play a down. That’s the reality of it. But the beauty is that most players are in great academic standing. That’s one of the blessings about being at Tucker High School—we have great counselors, great teachers, great administrators and great parents.”

Stephenson and Tucker lead a districtwide tradition of success, followed closely by Cedar Grove, Arabia Mountain and Columbia high schools. As of Fall 2017, all of DCSD’s 19 football programs were represented on at least one college football roster.