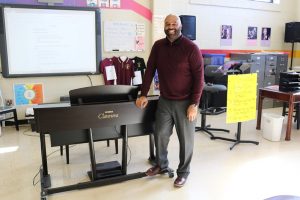 Performing at Carnegie Hall was a once in a lifetime experience for Tucker Middle School chorus teacher Timothy Simmons.

Last school year, the Tucker Middle School chorus performed at the prestigious Carnegie Hall, a concert venue in Midtown Manhattan in New York City. The middle school students sang in the same building that Duke Ellington, Billie Holiday, Nina Simone, The Beatles and many other famous artists performed in.

Simmons said taking his students to the famous venue for an invitation-only performance was the highlight of his career.

“Never would I have thought that this little boy from North Carolina would be taking a group of kids, who qualified, to go and sing on a prestigious stage such as Carnegie Hall,” Simmons said.

Simmons said his students probably will not appreciate their performance at Carnegie Hall until they’re older.

“They knew that it was a big thing to do it, but I don’t think they will really appreciate it until they get older,” Simmons said. “For me, it was a phenomenal experience because I never thought I would be going there, and conduct a group that would be able to qualify to go there. It will be in my mind for the rest of my life.”

Simmons, a native of Winston-Salem, N.C., has been at Tucker Middle School since the 2010-2011 school year. The Winston-Salem State University alumnus started with DeKalb County School District in 1998 as a school bus driver. Four months later, he applied for a paraprofessional opening at Livsey Elementary school. That is where Simmons’ music teacher career began.

He led Livsey’s music department for more than 10 years before taking his talents to Tucker Middle School. Simmons said he teaches students with little to advance musical experience. When it comes to selecting songs, Simmons said he bases it on the students’ experience.

“I have a lot of kids who come from various backgrounds. Some of them sing pop, gospel or rhythm and blues, so I try, at sometimes, to incorporate that,” Simmons said. “But, mostly we sing more classical, spirituals and some African songs. We do gospel every now and then.”

Simmons said his favorite part of his job is seeing the excitement on his students’ faces after a successful performance.

“That’s rewarding to me—that they’ve seen their growth from when they started up until when we have a performance or at the end of the year,” he said. “Just seeing them grow musically, as well as just a human being too.”

Tucker Middle School chorus has traveled and competed in other cities, including Chicago, Nashville and Washington D.C. Simmons said traveling to perform in other places is important for the students’ musical growth.

“I think when other ears hear them, that just confirms what I’ve been trying to tell them,” he said. ‘I think it builds their confidence musically, because I give them one critique, but If somebody else hears them they might hear something totally different. I think if they get it from a different perspective really helps bring it all together.”

There are multiple course electives and after school activities for students to choose from as it relates to the arts. Simmons said students should consider chorus because it can help students be more well-rounded.

“[Singing] requires a certain amount of intimacy and exposure to be able to use your voice to make somebody else happy or bring joy to somebody else’s life,” he said. “Singing in chorus brings about a certain amount of discipline that is required. You have to have discipline and be dedicated, and also know they can learn and explore their voices. I think it helps kids be more well-rounded. The society that we live in now mostly focuses on computers, science and all of that. I think the music department helps bring balance to their life.”