MLS Teams Up with Sequoyah Middle for Campeones Cup

Shouts of joy. A ball soaring into the back of a net. Professional athletes high-fiving and playing alongside students. Fresh facilities. Local, national and international media interviewing school officials.

These were just a few things to be found at one DeKalb County School District (DCSD) event on Monday, August 12, 2019.

“This is great. We’re really appreciative to MLS, Atlanta United, Club América and Liga MX for supporting a DCSD school,” said DeKalb County Board of Education Vice Chairman Marshall Orson. “We have a large population that is really committed to playing soccer, or futbol. This is an opportunity to meet the needs of the community, and we hope this serves as a baseline for continuing to spread soccer throughout our district.”

As part of the celebration, DCSD partnered with the Latin American Association, Atlanta United, MLS, Club América, Liga MX, and Soccer in the Streets for a complete refurbishing of Sequoyah Middle’s soccer field, as well as a live clinic put on by players. Atlanta United was represented by Hector “Tito” Villalba, Andrew Carleton, and Mo Adams, while Club América was represented by Paul Aguilar, Nicolas Benedetti and Carlos Vargas. 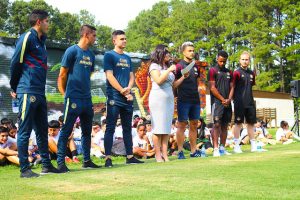 Players also signed autographs, conducted press conferences about the upcoming match, and distributed gifts to students. Villalba, who has netted 21 goals in 73 appearances for Atlanta United since arriving in MLS from Argentina, said he enjoys giving back to his local community.

“It’s something I really appreciate — being out in the community,” Villalba said. “I really enjoy the opportunity to play and interact with students.”

Sequoyah’s refurbishing includes new sod, soccer lines, goals, as well as a donation of equipment courtesy of the teams and organizations. A mural, titled “Soaring to the Top,” by local artist Thomas Turner was also installed in late July. The mural honors the Campeones Cup 2019 with symbols representing each team, the city of Atlanta, as well as the Sequoyah Middle School community.

“We know that soccer is one of the fastest growing sports and also one of the highest participation sports in the country,” said Orson. “We know that soccer speaks to a lot of our immigrant community. While I’m a fan of traditional sports, this sport speaks to a lot of our new students, and is reaching a lot of our families who have been here for a while. I’m proud people are seeing the diversity of DeKalb County, and are therefore recognize that this is a great place to invest resources. Sequoyah Middle is a great representative of that ideology and that representation. This is really, truly great.”