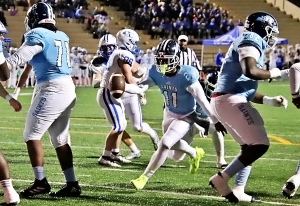 For the second consecutive year the Cedar Grove Saints face a fellow Region 5-3A foe in the Class 3A high school football state championship game in Sandy Creek at Georgia State’s Central Parc Stadium at noon.

The No. 1 ranked and defending state champions Saints defeated Region 5-3A foe Carver (Atlanta) 56-26 for the title last year and now take on an explosive No. 3 ranked Sandy Creek Patriots (12-2) for the second time this season as they try to defend their title. The Saints defeated Sandy Creek 49-35 at Sandy Creek earlier this season and the two teams have three common opponents in Collins Hill, Carver (Atlanta) and Douglass which both went 3-0 against during the regular season.

Cedar Grove (11-2) is coming off a second straight playoff shutout victory of 23-0 over No. 9 ranked Oconee County last Friday night at Godfrey Stadium. 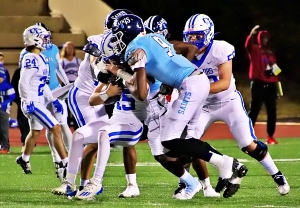 Senior outside linebacker Adonijah Green (9) makes a play against Oconee County last week. Green and his defensive teammates face a tough task in the Sandy Creek Patriots in the Class 3A state championship on Saturday. (Photo by Mark Brock)

Cedar Grove’s defense has allowed just 40 points (10 ppg) in its four playoff contests this season with a high of 33 in a 70-33 second round victory over Hebron Christian. Senior outside linebacker Adonijah Green leads the way with 63 tackles (10 sacks, 16 TFL) and junior defensive lineman Chase Kerns has 49 tackles (13 sacks, 19 TFL, 4 FC, 1 FR) to lead an aggressive front for the Saints. Senior safety Jakyre Horton ahs six interceptions to lead the secondary.

The two team’s first meeting was a shootout between the two high performing quarterbacks. Cedar Grove’s Colson threw for 361 yards (28-19-0) and six touchdowns while receivers Barry Jackson (6 receptions, 155 yards, 3 TDs) and Devin Carter (4 receptions, 109 yards, 1 TD) both went over the 100-yard receiving mark in the game.

Latimer threw for 248 yards and 5 touchdowns and ran for 96 in the loss. Cameron Watts caught three passes for 115 yards and three touchdowns.

Latimer had a pair of touchdown passes in the first quarter as the Patriots took an early 12-0 lead. Colson rallied the Saints in the second quarter with three touchdowns passes including Barry Jackson for 50, Ricky Lee for 35 and Devin Carter for 40 to put Cedar Grove up 21-12 at the half.

See link below for game notes on state championship:

SATURDAY PARKING FOR CLASS 3A CHAMPIONSHIP