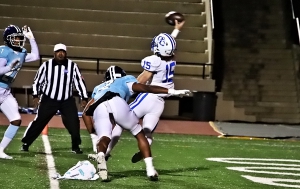 Cedar Grove’s Quinterio Lawson (2) forces an intentional grounding in the end zone by Oconee County quarterback Mac Ricks (15) to pick up a safety for the Saints in their 23-0 victory over No. 9 Oconee County. (Photo by Mark Brock)

For the second week in a row the No. 1 ranked Cedar Grove Saints shutout a ranked playoff opponent taking a 23-0 victory over No. 9 ranked Oconee County at Godfrey Stadium on Friday night.

Cedar Grove’s defense had six tackles for a loss totaling 27 yards while holding the Warriors (9-5) to 113 yards of total offense while only allowing four Oconee County drives to reach Saints territory and stopping two on downs at the 34.

The defense also scored the first points of the game for the Saints after a Quinterio Lawson diving touchdown was called back on a penalty and Cedar Grove missed a 45-yard field goal attempt. Three plays later Lawson got two of the points back as he pressured Oconee County quarterback to intentionally ground the ball from the end zone for a safety with 3:01 left in the first quarter.

Ricks would come up short on a fourth and six as the Saints defense forced him to run and then tackled him four yards short to take over on downs at their own 34-yard line.

The offense took over putting together a 10-minute drive of 15 plays and 66 yards to extend the lead to 9-0 on an EJ Colson two-yard touchdown run with 2:00 left on the first half clock. Colson had a big fourth down conversion running for four yards on a fourth and three at the Oconee 29 to keep the drive alive. Amari Forte connected on the PAT.

A facemask aided Oconee’s next drive, but the defense once again got a tackle for a one-yard loss to end the half at the Saints’ 34-yard line.

Adonijah Green made a big special teams play on the opening drive of the second half blocking a punt at the 25 and Joseph Slaughter picked up the loose ball and was ruled out of bounds at the Oconee three-yard line. 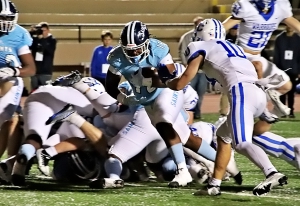 Two plays later Jakari Ponder barreled into the end zone from one yard out to extend the lead once again with 8:33 left in the third quarter. Forte was good again on the PAT to make it 16-0.

The Saints found themselves at their own one-yard line after an Oconee punt was downed on the one with 5:49 left in the third quarter. Cedar Grove answered with a 99-yard drive on 14 plays that took 4:33 off the clock.

A Colson pass across the middle to Barry Jackson that covered 20 yards got the drive rolling. Following a 10-yard run by Lawson to the Oconee 26-yard line, Demarcus Scott took over with runs of 10, 5, 6 and 5 yards to put the ball in the end zone with 1:16 left in the third quarter. Forte tacked on the PAT to make it 23-0.

The next four drives, two by each team, ended in punts. Oconee’s final drive of the game ended at the Saints’ 48 when Chase Kerns ripped the ball away from CJ Jones and returned it to the Oconee 42 with 11 seconds to play. One kneel down by the Saints ran out the final seconds and sent them to the Class 3A championship game for the second consecutive year.

Cedar Grove (11-2) faces a familiar foe in the title game in No. 3 ranked Sandy Creek (12-2) who finished as the runner-up to the Saints in Region 5-3A. Sandy Creek defeated the third team from the region in the semifinals in Carver (Atlanta) by a score of 49-14 to advance.

Cedar Grove defeated Sandy Creek 49-35 in their regular season meeting. It will be the second consecutive season for the Saints to face a fellow Region 5-3A opponent having defeated Carver (Atlanta) 56-26 in the state title game a year ago.

The two teams are set to take the field at 12:00 pm on Saturday, December 10 at Georgia State University’s Center Parc Stadium with the Class 3A state title on the line.