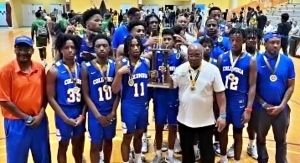 The Columbia Eagles went to Freeport, Bahamas and brought back the championship trophy of the Tabernacle Baptist Christian Academy Thanksgiving Tournament in a four-game sweep.

Columbia (4-0) faced Sunland Baptist, the Bahamas national championship team, for the title after both won their first three games to reach the finals.

Rashad Headges was big for the Eagles in the title game hitting for a game-high 24 points for which he was named the Tournament Most Valuable Player the 72-66 victory. Headges finished the tournament with 59 points total in the four games.

Terrell Wright had a big box score of his own with 15 points, 10 rebounds and 5 blocked shots in the win and finished with 21 blocks in the tournament. Jamarcus Hatcher added his own double-double of 10 points and 10 rebounds for the Eagles while Trevian Callaway added 9 points and 11 assists. Callaway finished the tournament dishing out 35 assists, 10+ steals and scoring 56 points in the four games.

Donnell Basden had 15 points to lead the Stingers in the championship loss.

Columbia outscored its first three opponents 248-88 (82.7 – 29.3 average) on the way to the finals. The tournament consisted of seven teams from the Bahamas and two from the United States (Columbia, Brainerd, TN).

The tournament has become known as the USA-Grand Bahama Showdown after over 20 years of competition.

Trevian Callaway led the Eagles with 16 points and 10 assists and Headges scored 13. Kevin Bruce and Mekhi Craft hit for 11 points each in the game. Terrell Wright had 7 points, 10 rebounds and 5 blocked shots.

Trevian Callaway had his second big game of the tournament hitting for 18 points and dishing out 8 assists. Terrell Wright had a 13-point, 10-rebound double-double and blocked six shots in the win. Kevin Bruce contributed 15 points and Rashad Headges added 10.

GAME 3
Columbia 93, Jack Heyward 20
Five Eagles hit double digit points on the way to Columbia’s 93-20 win over the Bahama’s Jack Heyward in the third game of the tournament.

Cassidy Golden scored a team-high 14 points for Columbia while Callaway added 13 points, 6 assists and 4 steals. Headges hit for 12 points along with Kevin Bruce and Jamarcus Hatcher tossed in 11 points and had 7 rebounds. Wright added 8 points, 8 rebounds and 5 blocks.