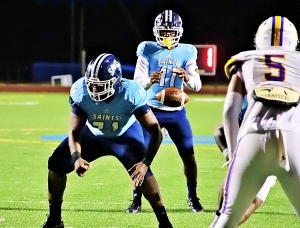 A Top 10 battle in the Class 3A high school football state playoffs semifinals is set for Friday at 7:30 pm at “Buck” Godfrey Stadium as the No. 1 ranked Cedar Grove Saints host the No. 9 ranked Oconee County Warriors.

The Saints moved into the semifinal round for the seventh time in the past eight seasons with a 30-0 shutout of No. 2 ranked Calvary Day last Friday at Godfrey Stadium.

Cedar Grove’s Quinterio Lawson (2) brings down the Calvary Day quarterback for a loss in the Saints win last Friday. (Photo by Mark Brock)

The Saints defense recorded its first shutout of the season holding the Cavaliers (11-1) to just 137 yards of total offense on the night including three big stands deep in their own territory. Cedar Grove stopped Calvary on fourth down three times and blocked a field goal (Jakyre Horton).

Oconee County upended Carver (Columbus) 14-6 to advance to the semifinals as a No. 3 seed. CJ Jones had an early touchdown run and Whit Weeks touchdown catch from Mac Ricks and then a game-saving interception late in the game propelled the Warriors into the semifinals.

Ricks leads the Warrior offense which relies mostly on its ground game and the feet of Jones (12 touchdowns).

Senior linebackers Samson Stearns (71 tackles) and Whit Weeks (70 tackles) lead the Warriors on defense. Weeks has 12 tackles for a loss on the season.

The two teams share one common opponent on the season in Hebron Christian. Oconee loss a tough 35-28 battle in region play to Hebron while Cedar Grove knocked off Hebron 70-33 in the season round of the state playoffs.