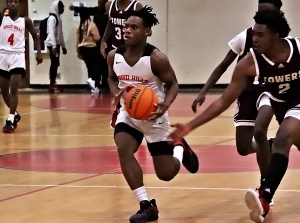 Druid Hills guard AJ Etienne (2) looks for a pass following a steal on the defensive end of the court. Towers’ Brandon Underwood (2) was chasing Etienne and came up just short of knocking the ball away. (Photo by Mark Brock)

Key spurts from Druid Hills’ offense spurred the home teams to a sweep of the Towers boys’ and girls’ team in non-region high basketball action on Thursday night.

Towers’ Jalen Kelly opened the second quarter with a steal for an easy layup to trim the Red Devils’ lead to 12-7. The Titans (0-3) would not score for almost four minutes as Druid Hills (1-0) went on a 20-0 run that virtually ended the game in the first half.

Austin Walker started the run with a driving layup and Abel Etienne stroked three-consecutive three-pointers as the lead ballooned to 23-5. A three-point play by Josiah Marsh and steals by Malachi Smith and David Sledge rounded out the run, Smith’s steal made it 32-5 with 4:00 left on the first half clock.

Walker’s drive to the basket with 34 seconds remaining put Druid Hills up 40-11 at the half.

Juan Wharton scored three consecutive baskets, including two put backs, as the Red Devils made it 48-11 with 5:31 to play in the third quarter. Druid Hills would go on to outscore the Titans 25-6 in the third quarter as eight different players scored in the period.

Late in the fourth quarter the Druid Hills student section started chanting, “We want 30!”. Coach Antoine Stroud obliged and sent fan favorite Lonzo Milla into the game. Milla scored with 1:50 to play on an assist from Walker to the delight of the pumped up crowd. Milla would add two rebounds and an assist. 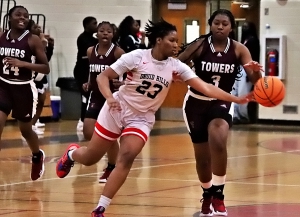 Druid Hills Anissa Brailsford (23) goes for a steal against Towers’ Iteria Davis (3) during first half action of the Druid Hills 67-15 win. (Photo by Mark Brock)

GIRLS: Druid Hills 67, Towers 15
Two 9-0 runs in the first half got the Druid Hills Lady Devils out in front on the way to a 67-15 season opening victory over the Towers Lady Titans in the opener at Druid Hills.

Anissa Brailsford opened the first 9-0 run to start the game with a pair of baskets on an offensive rebound and a steal. Baskets by Aalon Turner and Tiara Jones added to the start by Brailsford to help make it a 9-0 lead with 4:05 remaining in the quarter. Aneya Knight got Towers on the board with a layup on an assist by Makayla Coleman with 3:47 to play in the period.

Journey Conley scored a pair of baskets within 27 seconds of each other and Turner had a steal for her second made shot of the period to give Druid Hills (1-0) an 18-4 lead heading into the second quarter.

Brailsford again played a role in another 9-0 run to open the second quarter hitting a layup on an assist from Maraisha Rivers following a steal by Forest. Turner’s steal and layup with 3:06 left in the half made it a 27-4 game. Brailsford wrapped up the first half with a steal and the and-one to make it 32-7 at the break.

Rivers opened the second half with a layup on a nice pass from Brailsford as Druid Hills went on a 10-0 run to extend the lead to 42-7. Brailsford added a free throw and basket before Forest hit a three-pointer and Turner scored on another assist by Brailsford.

Leading 51-12 going into the fourth quarter Druid Hills closed out the game to give the team a 1-0 start on the season.

Makayla Coleman connected for 10 points to lead the Titans (0-3).