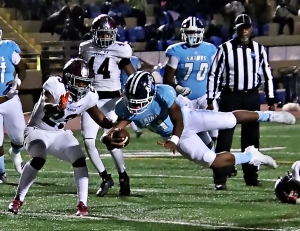 Cedar Grove quarterback EJ Colson dives for a touchdown to give the Saints the first of three touchdowns on the night. (Photo by Mark Brock)

The battle of last year’s Class 3A state title reunited on Friday night at Godfrey Stadium and the No. 1 ranked Cedar Grove Saints overcame 171 yards in penalties (19) to defeat the No. 4 ranked Carver Panthers 21-2.

Cedar Grove (7-2) was playing their first home game of the season in their normal home stadium of Godfrey and the first half got off to a rough start due to 13 penalties, three of which nullified touchdown runs in the second quarter of nine and 12 yards by Boden Walker and 18 by EJ Colson,

The Saints put the lone score up in the first half on a thrilling scramble by Colson when he got chased out of the pocket. Colson ran right and reversed his field avoiding tacklers as he came back left and turned up the middle of the field. A Carver defender got him by the foot around the three yard line, but Colson slipped the tackle and dove into the endzone for the touchdown. Christian Orozco hit the PAT for a 7-0 Cedar Grove lead with 11:18 remaining in the first half.

Cedar Grove forced Carver into a three and out and got the ball at the 50-yard line. The Saints marched down to the Carver nine-yard line despite another holding penalty. Colson set up Walker’s touchdown run with an 18-yard scamper. Walker got the rock two plays later and racing up the middle for nine yards and the touchdown. The run was called back on the Saints fourth penalty of the night, a holding call. 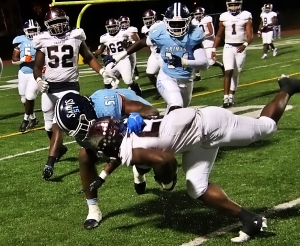 Cedar Grove’s defensive lineman Chase Kerns makes one his many tackles for a loss against Carver as he tosses Carver running back Shoun Bilal down near the sideline. (Photo by Mark Brock)

The drive eventually ended when a 40-yard field goal attempt by Amare Forte was called wide left. Jakyre Horton stopped Carver’s next possession with an interception to give Cedar Grove the ball at its own 41.

Colson drove the Saints down the field with a pair of 18-yard passes, one to Ricky Lee and another to Barry Jackson, as the Saints moved to the Carver 12 yard-line Walker went up the middle again to cover the 12 yards for a touchdown only to have a holding call take the points off the board. Two plays later another holding call pulled back an 18-yard run by Colson.

The half ended as Carver stuffed Walker on a third and goal from the one.

Midway through the third quarter Carver got on the board after a bid defensive stand inside the one-yard gave the football to the Saints with the ball just outside the goal line. Carver penetrated the backfield and hit Demarcus Smith in the endzone for the safety. The Carver came following a short punt by the Saints, an unsportsmanlike penalty and then a facemask penalty had Carver on the Saints seven.

With under eight minutes to play Colson dropped back and threw deep down the right sideline to a speeding Ricky Lee for a 61-yard pass to the Panthers’ five-yard line. Two plays later Colson pitched to Walker going around the left side and dove over a teammate locked in on blocking near the goal line for the score. Forte was good on the point after to make 14-2 with 6:25 to play.

Carver’s next possession turned into a punt following Chase Kerns sack of Bryce Bowens. Kerns and his defensive teammates up on the line harassed Bowens for most of the game limiting his passing to just six of 21 with two interceptions and only 41 yards.

The Saints overcame another holding call as Colson tossed another long pass to Ricky Lee for a 47-yard scoring pass with 1:10 to play. Forte made it 21-2 with his PAT.

Carver’s last ditch drive ended as Lahki Roland intercepted Bowens and ran out the clock for the win.

Colson finished the night 10 of 22 passing for 181 yards and a touchdown while adding 70 yards and a touchdown on 16 carries. Cedar Grove’s defense led by Kerns, Adonijah Green, Kyle Mosley and Everett Roussaw accounted for twelve tackles for a loss, including six sacks, as the defense allowed just 46 total yards for Carver.

AJ Hardge got the Pirates (4-6) off and running with two first quarter scores, one rushing and a catch of one of Graves’ touchdown passes. Jaylen Stamps interception late in the first half thwarted a Druid Hills (4-6) scoring threat.

Jabril Dixon put the Pirates up 10 late in the third quarter with a kickoff return for a touchdown.

Chamblee 42, Lithonia 18
Special teams got the Chamblee Bulldogs rolling from the opening kickoff on the way to a 42-18 win over the Lithonia Bulldogs on Friday night at Hallford Stadium.

Chamblee (7-2) recovered the opening kickoff on the Lithonia five-yard line and later scored the go-ahead touchdown on a two-yard run by Larry Harris.

In another special teams play, Ashton Bolston blocked a punt and Christian Williams recovered for a touchdown.

Senior quarterback Fabian Walker raised his touchdown pass total to 22 on the season with four on the night. Tristian Sizemore was on the receiving end of two of Walker’s TD passes and added a pick-six for 48 yards. The defense was led Miller Meeks with six tackles (4 tackles for a loss, 4 sacks).

Chamblee moves into the state playoffs for the first time since 2009 and will host McIntosh in the Class 5A first round on Saturday at North DeKalb Stadium. The time has not been set yet.

Columbia 44, Towers 0
Three Columbia Eagles scored two touchdowns apiece on the way to a 44-0 Region 5-2A win over the Towers Titans on Friday at Avondale Stadium.

Quarterback Elijah Morgan ran for two touchdowns and threw another to Jadan Baugh to lead the way for Columbia (7-3). Baugh added a punt return for a touchdown. Royce Tolbert added two rushing touchdowns as well. The defensive shutout was led by Kenyon Partridge with three sacks.

Lakeside 59, Clarkston 12
Seven Vikings scored at least one touchdown on the way to a season ending 59-12 win over the Clarkston Angoras at Adams Stadium on Friday.