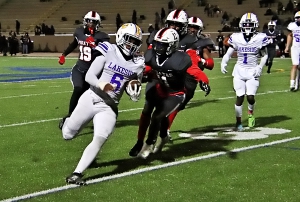 Lakeside’s Jean-Luc Noison (6) gets away for a 38-yard touchdown run, his second TD of the night, as the Lakeside Vikings secure their first winning season since 2003 with a 40-18 victory over Stone Mountain. (Photo by Mark Brock)

Five rushing touchdowns on offense and four take-aways by the Lakeside defense propelled the Vikings to their first winning season since 2003 and a 40-18 victory over the Stone Mountain Pirates at Hallford Stadium on Thursday night.

Lakeside got on the board first via a Jay Hanson 30-yard field goal with 7:40 to play in the first quarter. The score was set up by the Vikings’ first takeaway of the game on an Asher Lin interception turn of 28 yards to the Stone Mountain five-yard line.

The Vikings blocked a Stone Mountain field goal attempt and tackled a Pirate who picked up the ball at the Lakeside 47. A 13-yard pass from Kyle Davis to Kelly Anthony and a Jean-Luc Noison18-yard run fueled the 53-yard drive. Luke Chilton powered through the line on an eight-yard run to get the Vikings in the end zone. Hanson’s PAT was good, and Lakeside led 10-0 with 0:04 on the first quarter clock.

On Lakeside’s next possession Davis rolled right and was forced to scramble back to his left where he lofted a pass deep down the left sideline to Talib Mustafa-Moore for a 69-yard gain to the Pirate two-yard line. A penalty moved the ball to the one and Davis snuck it in behind his center for the score. Hanson was good again to make it 17-0 with 9:09 left in the first half.

Jaylen Stamps had a 60-yard kickoff return after the Lakeside score to set up Stone Mountain’s first touchdown of the game. Cameron Graves ran it in from four-yards out with 4:34 remaining in the half. The try for two was no good as the Pirates trimmed the Vikings’ lead to 17-6.

Stone Mountain force Lakeside into a punt formation on the Vikings’ next possession only to have Chilton take the direct snap and rumble 11 yards for the first down at the Pirates 38. Jean-Luc Noison got around the right corner and tight-roped down the sideline into the end zone for a 38-yard touchdown run. Hanson was again good on the PAT to make it 24-6 heading into the half.

Graves helped the Pirates cut the lead to 24-12 as he dropped back and passed underneath to Jabril Dixon. Dixon turned up field, broke a tackle and weaved his way into the end zone with 6:31 left on the third quarter clock. The try for two was again no good. 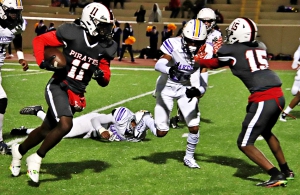 Stone Mountain’s Jabril Dixon (11) weaved his way to a 38-yard receiving touchdown in the Pirates loss to Lakeside on Senior Night. (Photo by Mark Brock)

Chilton picked off a Stone Mountain pass and returned it 11 yards to the Stone Mountain 22 to set up another scoring opportunity for the Vikings. Noison took it 11-yards up the middle for the touchdown with nine seconds left in the third period. Hanson put the PAT through the uprights to push the lead to 31-12.

Lakeside was backed up at its own four-yard line after Lin intercepted his second pass of the game when a fumble was scooped up by Stone Mountain’s Jeremiah Leslie and returned five yards for a touchdown. The try for two went incomplete as Stone Mountain pulled within 31-18 with 11:13 to play.

The Vikings responded with a five-minute drive that included pass completions of 12 and 15 yards from Davis to Anthony and a 21-yard run by Noison to get to the four-yard line. Davis went the final four yards on a keeper to adde to the Lakeside lead. Hanson’s PAT made it 38-18.

The last points of the night came on a safety as Lakeside’s Daniel Arzabe chased Graves back and out of the end zone with 1:01 to play.

In other action on Thursday night, Tucker (3-5) got its first Region 4-5A win 57-8 over Martin Luther King (2-7) at Adams Stadium in the Tigers’ homecoming. Tucker’s Jordan McCoy ran for 174 yards and three touchdowns on 17 carries to lead the Tucker offense which score eight touchdowns in the game.

Ethan Sanders added 78 yards and three TDs and a two-point conversion of his own for Tucker and Izayah Horsham added five carries for 50 yards and a touchdown. Quarterback Jamar Graham connected on a three-yard touchdown to Evan Ffrench. Ffrench was 7-7 on PATs.