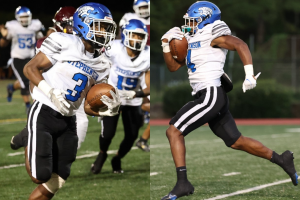 Stephenson’s one-two punch at running back Cheik Keita (left) and Devin Ingram (right) combined for 210 yards rushing and three touchdowns to lead the Jaguars to a 28-3 win over the Tucker Tigers. (Photos by Arielle Hayes)

Running backs Devin Ingram and Cheik Keita combined for 210 yards and three touchdowns to lead the Stephenson Jaguars to a 28-3 victory over the Tucker Tigers on Friday night at Adams Stadium.

Ingram (14 carries, 101 yards, 2 touchdowns) got the Jaguars (2-2) on the board in the first quarter with the first of his two touchdowns in the game to put Stephenson up 7-0.

Tucker (2-3) cut into the lead as a drive stalled inside the Stephenson 10 and Evan Ffrench connected on a 20-yard field goal to cut the lead to 7-3.

The score was still 14-3 in the third quarter with the Jaguars driving when Ingram scored on a five-yard run with 6:02 left in the period as Stephenson extended the advantage to 21-3.

Keita (11 carries, 109 yards) wrapped up the scoring with a five-yard dash around the left end with 55 seconds to play in the game to make the final margin of 28-3.

Linebacker Caleb Bristow had 10 tackles (4 solo, 6 assists) to lead the Jaguars’ defense that limited the Tigers to just three points on the night. 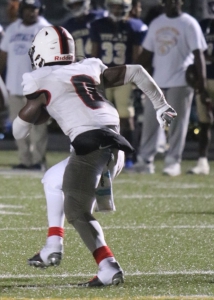 Stone Mountain 35, Drew 7
The Stone Mountain Pirates got in the win column for the first time this season with a complete game performance to defeat the Drew Titans 35-7 on Thursday night at Southern Crescent Stadium.

The offensive line of Lorenzo Brooks, Hezekiah Leslie, Erick Barrios, Varney Shannon, Jordan Tuck and Shar Lawin paved the way for a rushing attack that accounted for 426 yards and four touchdowns on the ground. Antonio Hardge was the leading gainer with 268 yards and three touchdowns on 11 carries.

Nate Simmons led the defense with a pick-six for another score as the Pirates held an opponent under 200 yards of offense for the first time this season. The Pirates also collected four sacks on the day and Hardge also contributed an interception.

Special teams was led by kicker/punter Sabani Monga who was four of five on PATs and hit his only punt of the night 59 yards to flip the field for Stone Mountain (1-4).

Dunwoody 30, Lakeside 0
Dunwoody’s Luke Phillips blocked a punt in the end zone and Luke Cole made the play for a safety to set the tone for the Wildcat defense on the way to a third consecutive shutout 30-0 over the Lakeside Vikings on homecoming at North DeKalb Stadium on Friday night.

Dunwoody improved to 4-1 overall and Lakeside fell to 3-2.

Columbia 47, McNair 0
The Columbia Eagles got Region 5-2A play off to fast start with a 47-0 homecoming victory over DeKalb rivals McNair Mustangs on Friday night at Avondale Stadium.

Royce Tolbert fueled the offensive output rushing for 150 yards and two touchdowns on 12 carries in the game. Jaden Baugh added a 77-yard touchdown run in the game.

Edwin Moore was big in the defensive shutout with four tackles, two for a loss. Columbia improved to 4-1 overall and 1-0 in region play while McNair’s two-game winning streak ended to drop the Mustangs to 2-3 overall and 0-1 in the region.

Julian Shanks had a 10-yard touchdown pass to Jordan Miller in the first quarter and Jonathan Odeh-Adimah scored on a 24-yard run to give the Rams (2-3) a 13-0 lead at the half.

Locust Grove rallied with a pair of fourth quarter touchdowns, the last with under three minutes to play to cut the lead to 13-12.