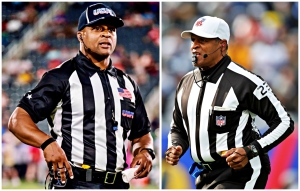 Southwest DeKalb football alum Tra Boger got the call up to referee in the NFL from his dad, Jerome Boger, earlier this year as the former stellar Panthers football player and two-time All-Conference-USA performer at Tulane climbed the ladder to the league.

It was the culmination of 10 years of demanding work calling high school games in New Orleans and moving up the college ladder from SIAC, SWD, Conference-USA and the SEC (last 6 years) and the USFL this past spring.

“It was a surreal feeling,” said Tra. “I was happy, shocked and elated all at the same time. It made it more special to have my dad be the first one to let me know and tell me how proud he was of me.”

Jerome (a 19-year veteran in the NFL with 17 years as head referee) got the call from Vice President of Officials Walt Anderson while talking with high school officials earlier this year.

“I had to let him know I would call him back,” said Jerome. “It was my boss, so I had to get back with him quickly and I asked him what was up. He told me they were calling Tra up to the NFL and wanted to know how I felt about being the one to tell him. I was ecstatic. It was a special moment for me to tell my son he was joining me in the NFL.”

A three-year starter as quarterback at Southwest DeKalb, Tra threw for over 2,400 yards and 15 touchdowns (1998-00) and is seventh all-time on the Panthers’ list despite being in a run-oriented offense. He is also one of 14 DeKalb quarterbacks to pass for over 2,000 yards and rush for over 1,000 yards (1,301 yards, 27 TDs) during their career.

He signed with Tulane University where he would play five seasons (injured during one season) as a defensive back and is ninth all-time in interceptions at the school with 11 over his career including two pick-sixes.

Keeping himself involved in the game of football after his playing days, including short stints with Green Bay and Tampa Bay and the Canadian Football League’s Toronto Argonauts was easy for Tra Boger after watching his dad referee at the various levels growing up.

“I grew up watching referee training films with him and that kind of helped me have an interest,” said Tra. “A lot of the aspects of refereeing were not foreign to me after seeing so much growing up.”

Part of that also involved traveling to high school games with his beginning in elementary school with Jerome picking him up after school to go with him.

“I remember picking him up from school and him helping us with the chains and down markers,” said Jerome. “He was very attentive to everything that was going on in the games and how they were called.”

The now Assistant Principal at Morrow High School in Clayton County, Tra served as a graduate assistant coach at Tulane and assistant on the high school level in New Orleans and the Atlanta area when he went to his father to see how to get in to calling games.

High School, Pee Wee and SIAC games were all part of the first year of learning all he could. He got into calling Southwestern Athletic Conference (SWAC) games in his second year before moving into Conference-USA in just his third year. Three years later he moved up to the Southeastern Conference (SEC) where he would call three SEC Championship games including his first in 2017 (second year) featuring Georgia and Auburn.

“Moving up involved a lot of hard work, including going to camps each offseason and building on the knowledge of the game,” said Tra. “I was also able to get to know coordinators from the different conferences who attended the camps.”

It was not a surprise to Jerome that Tra chose to go the officiating route after their discussions of the time you put in as a coach.

“We discussed how much time it took being a coach from the long hours every day and how as an official even though you study game film and evaluate yourself you get more down time,” said Jerome. “He put in a lot of hard work at the camps and calling games just like I did. I knew he might join me in the NFL one day.

One of the key points in the process for Tra was getting to call a Division II playoff game.

“Getting to call that game kind of flipped a switch for me and let me know how fortunate I am to be here,” said Tra. “It was kind of my spark to empower me and springboard into calling games in Conference-USA.”

Tra credits his high school football coach, the legendary Buck Godfrey, for helping him develop a thick skin to ignore the yelling a person receives at being a referee.

“What I hear on the field is nothing like messing up in practice or a game and hearing it from Coach Godfrey,” laughed Tra. “He really helped prepare me for life after football as he did with so many of us who played for him.”

Godfrey has a lot of respect for his former player and the family unit as a whole, “His family worked well together. His Dad, Jerome, was one of the most respected referees when I was coaching. You always knew you had a level playing field when he and his crew were calling games.”

“Tra was a heck of a football player,” continued Godfrey. “He was a winner and I know he has trained for this and has the presence to do an excellent job. His father was a hero to him, and he followed his lead. I am incredibly happy for him.”

Tra sees much of his role as a referee carrying over into other aspects of life including talking to kids at his school and being prepared for what life might throw at you.

“Being a referee comes down to not being about me, but the integrity of the game,” said Tra.

The NFL does not like to disclose who is calling any game due to various safety reasons but Boger debuts on an NFL field on August 13th in a preseason game and the final week of the preseason he and his dad will get to call a game together before the regular season begins in September.

Both are looking forward to the third week of the preseason when they get to step on the field together.

“Tra doing this on his own without me trying to force him or prod him into doing it is something that makes you proud as a parent,” said Jerome. “It is a good feeling and really takes me back full circle to the time of him as an elementary student going to the games with me. And now we get to work together in the NFL.”