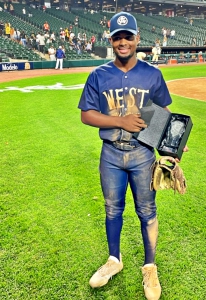 Moon was selected to play in the event named after Negro League standout Ted “Double Duty” Radcliffe (36 years as a pitcher, catcher and manager) which celebrates the best inner-city high school baseball players in the country. It serves to remember the history and tradition of Negro League Baseball in Chicago.

It also has presented top prospects for the next generation the opportunity to shine in front of coaches, scouts and their community while also remembering the Negro Leaguers who made these opportunities available.

The 16th annual version had plenty of offensive fireworks as Moon helped power the West to a 13-8 win over the East.

Moon finished the night 3-5 at the plate with a double, two RBI and three stolen bases. His performance was recognized with the MVP Award for the West squad.

The rising senior at Redan was coming off an offensive explosion in the Class 3A state playoffs which included six home runs. He had three “Moon Shots” in best-of-three series wins over Dawson County (first round) and Burke County (semifinals). He and the Raiders came up just short in a 2-1 series loss to Pike County at Coolray Field back in May.