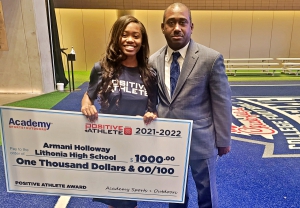 The Positive Athlete of Georgia recognized three DeKalb County Schools athletes with statewide awards for their Positive Attitudes for the 2021-22 sports year.

Positive Athlete of Georgia recognizes athletes that have overcome difficult circumstances, given back to their schools and communities in a significant way or just have an infectious positive attitude that makes everyone around them a better person.

Holloway, the Regional winner for Cheer/Gymnastics, was one of four honorees to receive the $1,000 Academy Sports + Outdoors Positive Athlete Scholarship.

Lakeside’s Gross won the statewide award for Special Olympics as the winner of the Boys’ Swim and Dive Regional Award winner. 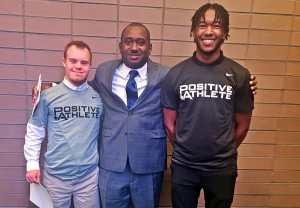 Eleven other DeKalb athletes were recognized with the Atlanta/DeKalb Regional awards for their positive attitudes, leadership, hearts for others and service.

Those selected were nominated by their coaches, school personnel and parents for what they saw in each of the athletes.

Positive Athlete of Georgia has given out over $500,000 in scholarships over the past nine years.