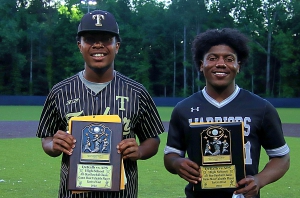 DeKalb was holding a 5-3 lead after a four-run bottom of the seventh when APS came to bat in the top of the eighth and responded with four runs of its own to go-ahead 7-5.

Jeremy Wellmaker (Maynard Jackson) led off the top of the eighth with a single off DeKalb’s Barry Manning (Tucker). Elijah Grant (Carver) followed with an opposite-field double down the right-field line to put runners on second and third.

North Atlanta’s Chaice Boines drilled a 1-1 pitch into the right-center field gap to plate the two runs and to knot the game at 5-5 with no outs in the inning.

A single by Ayden Farrow (Maynard Jackson) and a throwing error allowed Boines to score the go-ahead run to make it 6-5. Farrow moved in to scoring position on the error.

DeKalb reliever Jaden Camp (Druid Hills) responded with a strikeout of Drew Gossett (Midtown) and a flyout by Noah Collins (North Atlanta) as Farrow was still at second. Devon Alleyne (North Atlanta) capped off the inning for APS with an RBI double before Manning struck out Thomas Meyer (Midtown) to end the inning with the score 7-5 in favor of APS.

DeKalb got a pair of runners on in the bottom of the eighth but left them stranded as Farrow got the final out of the inning on a fly ball by Sadir Ryan (SW DeKalb).

APS tacked on three more runs in the top of the ninth as two DeKalb errors opened the door. APS pulled off a double steal to push a run across with Doug Evans (Maynard Jackson) scoring after reaching on a fielder’s choice and Wellmaker, who had singled, moving into scoring position.

An infield single by Grant would score Wellmaker to make it 9-5. Grant came around to score following the second error of the evening and a passed ball for the 10-5 advantage.

DeKalb loaded the bases with two out in the bottom of the ninth as Brady Jones (Decatur) reached on a third strike in the dirt, Max Fishbein (Druid Hills) singles and Eyon Everett (Redan) drew a two-out walk. Farrow induced a grounder to short and APS got the force at second to end the game.

Alleyne had a sacrifice fly in the top of the first inning to give APS an early 1-0 lead. DeKalb knotted the game at 1-1 in the bottom of the second on Grayson’s infield hit to score Jones.

Neither team could score over the next three innings and APS struck for two runs in the top of the sixth to go up 3-1. A DeKalb error and another double steal accounted for the runs.

DeKalb responded in the bottom of the seventh with four runs aided by three APS errors. A pop up by Ryan behind second was allowed to drop with two outs in the inning led to two consecutive walks by Alleyne to Sydyk Ross (Chamblee) and Jones to load the bases.

A missed throw at second on a grounder by Fishbein allowed Ryan and Ross to score to tie the game. Grayson delivered an RBI single to plate Jones for the lead at 4-3 before Dylan Akins (Druid Hills) was hit-by-a-pitch to drive in the fourth run of the inning for the 5-3 advantage.

DeKalb left 13 runners on base in the game and APS left eight.

Chaice Boines was 2-4, scored three runs, had a double, a stolen base, two RBI and one walk at the plate and pitched two scoreless innings to earn APS Most Valuable Player honors. Elijah Grant was 2-3 with an RBI for APS with teammates Ayden Farrow and Jeremy Wellmaker both 2-4.

See links below for game box score and game benchmarks: