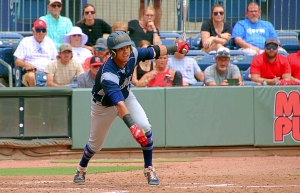 Redan’s Anthony Mateo’s RBI single down the right field line gave the Raiders an early 2-0 lead in their 5-4 loss to Pike Co. in the Class 3A state title game at Coolray Field. (Photo by Mark Brock)

The Redan Raiders exciting run to the Class 3A State Championship came to an end with the tying run on third base in a 5-4 loss to the Pike County Pirates in the deciding third game of the best-of-three series played at Coolray Field on Tuesday afternoon.

A two-out, two-run triple to the wall in the left field by Pike County’s Coleman Johnson broke a 3-3 tie in the bottom of the sixth inning giving the Pirates (36-5) a 5-3 lead with the Raiders (29-8) facing their final three outs of the game. It was Johnson’s first hit of the game and just the third for the Pirates.

Deniel Ortiz worked the count for a one-out walk to get things started for Redan in the top of the seventh. Bernard Moon followed with a double to left to put runners on second and third with one out and the tying run 180 feet from home.

Pike County went to reliever Kole Hammond with a championship on the line and Redan’s Manolo Parcels coming to the plate.

Parcels lifted a fly ball to right field for a sacrifice fly to score Ortiz and cutting the deficit to 5-4 and advancing Moon to third with two-out in the game.

That brought Anthony Mateo to the plate. Mateo had gotten the Raiders into the deciding third game with a two-hit shutout in Game 2 and had delivered an RBI single in the top of the fourth to put the Raiders up 2-0.

Mateo battled Hammond fouling off a couple pitches while getting the count to 2-2. Hammond’s next pitch was popped past the Redan dugout and looked to be going into the netting in front of the stands but was hauled in by the Pirates first baseman to end the game.

Redan grabbed an early 1-0 lead in the top of the first inning as Jason Avila walked and late scored on a wild pitch. The game remained 1-0 in favor of the Raiders heading into the top of the fourth inning. Moon walked to start the fourth and two batters later Mateo lined a single down the right field line to plate Moon for a 2-0 Redan lead.

Pike County answered with a three-run inning to take a 3-2 lead as a Redan error with two out and the game tied at 2-2 led to a two-out, RBI double by Jason Buffington for the lead. 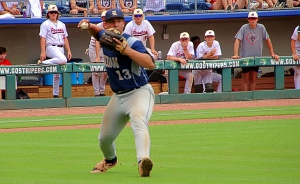 Redan pitcher Deniel Ortiz fielded a bunt and threw to first for out during fifth inning action on the mound. (Photo by Mark Brock)

Redan’s Ortiz, who had a tough fourth inning on the mound, aided his own cause with an RBI single to score Avila to pull the Raiders back even at 3-3. Redan had an opportunity to regain the lead in the top of the sixth only to have a rally ending double play turned by the Pirates’ defense.

Ortiz was the hard-luck loser on the mound as the two runs scored in the sixth by Pike County were charged to him as the triple by Johnson hit the wall just over the outstretched glove of outfielder Parcels to plate the winning runs.

Redan outhit (7-3) the Pirates for a third straight game as the series featured 6-4 and 5-4 wins by Pike County and a 2-0 shutout by Redan.