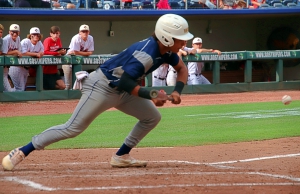 Redan’s Adriel Martinez lays down a bunt for a single that turns into two Redan runs in the opening game 6-4 loss to Pike County. (Photo by Mark Brock)

Redan’s Anthony Mateo gave the Raiders just what they needed with a two-hit shutout in Game 2 of their Class 3A Baseball State Championship series to extend Redan’s postseason run in a 2-0 win over the Pike County Pirates on Monday night at Coolray Field in Lawrenceville.

Mateo was on when the Raiders needed him as he went all seven innings allowing just two hits and no runs while striking out 9. He set the Pirates down in order three times including the third, fifth and sixth innings.

He gave up his first hit on a controversial call on a bunt attempt by Pike County’s Braden Osbolt in the top of the fourth inning. He would not allow another hit until the seventh inning on a two-out hit by Kaleb Hammond.

Mateo then shut the door with a high fly ball to centerfield hauled in by Jason Avila to close out the win.

The Raiders gave Mateo the only two runs he needed in the bottom of the third as Pike County’s Osbolt who was on the way to a 10-strikeout night on the mound hit a bump in the road.

Avila hit a short pop over the infield that no one could get to and ended up with a double as both middle fielders left second uncovered. Eyon Everett followed with a sharp hit ball into center field to score Avila and put the Raiders up 1-0.

Two batters later Bernard Moon hit a bullet over the Pirates’ center fielder for a RBI double to make it 2-0. 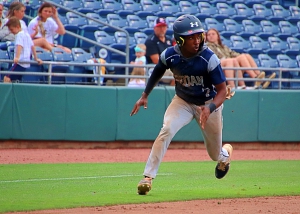 Redan’s D’Anthony Marks holds up at third after drilling a triple to deep left field against Pike County. (Photo by Mark Brock)

Game 1: Pike Co. 6, Redan 4
Pike County scored five runs in the bottom of the fourth without the benefit of a hit and held of the Raiders 6-4 in the opening game of the Class 3A Baseball State Championship best-of-three series at Coolray Field on Monday afternoon.

After a bunt single by Adriel Martinez turned into two runs on a throwing error by Mason Trucks gave the Raiders the first lead of the game at 2-0 heading into the bottom of the fourth.

Redan’s Avila led off the fifth with a single and stolen base and teammate Manolo Parcels came through with a two-out single into left field to cut the advantage to 5-3 before Trucks got out of the inning on a pop up with the bases loaded.

Ortiz struck out the side in the bottom of the fifth and the Raiders were threatening in the sixth on a one-out triple by D’Anthony Marks. Reliever Kole Hammond was able to shut the door with the aid of big snag of a line drove off Avila’s bat and a strikeout to end the threat.

Pike County had runners at second and third with one out when Ortiz induced a pop up in foul territory that turned into a run for the Pirates as no one covered home and allowed Coleman Johnson to score from third. Ortiz finished the inning with a strikeout to prevent further damage with the score at 6-3.

Ortiz came to the plate to lead off the final at bat for the Raiders if they did not score three runs. Ortiz lifted a deep fly down the right field line that stayed fair into the Raiders’ bullpen for a solo shot to close the gap to 6-4.

Redan had Parcels (via hit) and Trionne Witherspoon (vis walk) on base with two out. Martinez drove a ball to deep left field, but it was hauled in to end the game.

The deciding game is set for 12:00 pm at Coolray Field on Tuesday.