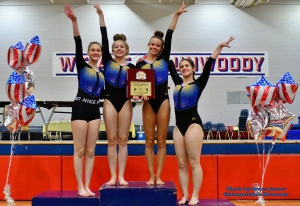 Sarah Wolf and Rachel McGuiness finished one-two in the All-Around to lead the Chamblee Lady Bulldogs to a second consecutive DeKalb County Gymnastics Championships title in the 2022 event held at Dunwoody on Tuesday.

Wolf claimed the All-Around gold medal with a cumulative score of 34.850 just ahead of teammate Rachel McGuiness who finished with a 33.600 total to take silver as Chamblee put up 100.150 points to win the county title.

Wolf finished just 0.550 points behind Lakeside’s Emma Cohen in the All-Around last year picked up gold medals in three of the four individual events this time around.

She repeated in the uneven parallel bars with a score of 9.000 just 0.300 ahead of both Ila Ischirhart of Druid Hills and Diane Willis of Lakeside who both finished with 8.7000 scores.

Wolf won the balance beam outright in 2021 but had to share the gold with Southwest DeKalb’s Gabby Pecke as the two tied with a score of 8.900. She moved up a spot in the floor exercise after tying Pecke for the silver a year ago to claim the gold medal with an 8.600 performance in this year’s event. 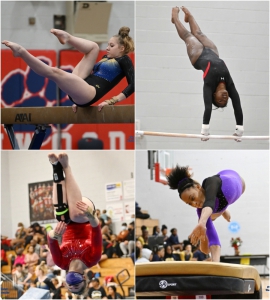 McGuiness moved up two spots in the vault competition to claim a bronze medal with a score of 8.600 and was just behind second place finishers Pecke and Makayla Turk of Druid Hills (8.350) with a score of 8.300. She also picked up fourth place finish in the balance beam (8.500) and fifth on the uneven parallel bars (8.300).

Druid Hills’ second place finish was led by a solid performance by Christina Henderson who totaled 30.200 points to lead the team with a sixth-place finish in the All-Around. She also picked up fifth place finishes in both the vault (8.500) and the balance beam (8.300). Ila Ischirhart contributed another big score with a win in the vault (8.850) and a tie for second in the uneven parallel bars (8.700) She also finished ninth overall in the All-Around.

Makayla Turk picked up a pair of medals for Druid Hills with a tie for second in the floor (8.350) and a silver on the balance beam (8.600). Esther Bryant picked up a bronze in the uneven parallel bars (8.600) to aid the Lady Red Devils charge to second.

Dunwoody’s Tabitha Johnson led the Wildcat run to third place in the team standings by compiling 32.350 points in the All-Around good for fourth place. She picked up a silver medal in the vault (8.700) and bronze on the balance beam (8.500).

Southwest DeKalb’s Gabby Pecke led the Lady Panthers to a fifth-place finish tying for the gold on the balance beam (8.900) and tied for the silver in the floor exercise (8.350).