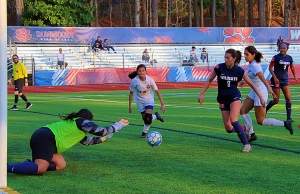 Dunwoody’s Julia Guild (9) comes up to put a carom off Berkmar goalie Hailey Barrios into the net for one of two of her goals in the 9-0 Region 7-7A victory for Dunwoody. (Photo by Mark Brock)

The No. 8 ranked Dunwoody Lady Wildcats cruised to a 9-0 win over the Berkmar Lady Patriots to remain undefeated in Region 7-7A girls’ soccer action at Dunwoody on Friday night.

Dunwoody scored eight goals in the first 19 minutes of the first half with Julia Gild opening the barrage at the 35:53 mark with a header into the back of the goal off a corner kick assist by Kate Barrett for the early 1-0 advantage.

Lily Garrigan followed up four minutes later with a blast from 25 yards straight out in the front to make it 2-0.

Lindsey Lampron collected a hattrick within a four-minute span to end the first half early with Dunwoody up 8-0. Lampron got behind the defense and won three one-on-one attacks on the goal.

A shortened second half featured just one Dunwoody goal when Sophia Renals lofted a long pass to a streaking Ella Holland, the starting goalie who came out of the goal in the second half, who put the ball into the left corner of the goal to make it 9-0 with 10:24 to play.

Dunwoody outshot Berkmar 24-1 in the game while Lampron (3), Garrigan (2) and Gild (2) all scored two or more goals in the game.

The Lady Wildcats sit alone at the top of the Region 7-7A standings with their 6-0 mark.

Dunwoody’s Ethan Archibald (2) gets control of the ball against Berkmar defender Edgar Torres (6) during first half action of Berkmar’s 1-0 Region 7-7A boys’ soccer victory. (Photo by Mark Brock)

BOYS: Berkmar 1, Dunwoody 0
The No. 5 ranked Dunwoody Wildcats dropped a tough 1-0 Region 7-7A boys soccer match to the Berkmar Patriots in the nightcap at Dunwoody to fall into a three-way tie for first.

For 66 minutes and 31 seconds the two teams traded shots to no avail as the score remained deadlocked at 0-0 for the majority of the game as both goalies matched each in saves.

Berkmar pressed the Dunwoody defense consistency and finally found a crack at the 13:29 mark of the second half when Berkmar’s Louis Beltran put a shot past goalkeeper Bryn Andrew to give the Patriots the lead at 1-0.

Dunwoody desperately needed a goal to prolong the game but found the going tough when getting into the Patriots’ half of the field. A couple of opportunities went by the wayside as the Berkmar defense was able to turn away some Dunwoody shots and clear the ball out of the goal area.

The clock was ticking down under 20 seconds when Dunwoody got one last possession and moved into the Berkmar zone. As a Wildcat tried to move in from the left side he was fouled with three seconds to set up a penalty kick for the Wildcats with a chance to tie the game.

Dunwoody’s Shama Shasha lined up the penalty kick and went low to the right side. Berkmar goalkeeper Alfonso Pinon dove to his left to block the shot and secure the ball to preserve the win for the Patriots (6-5-2, 4-2).