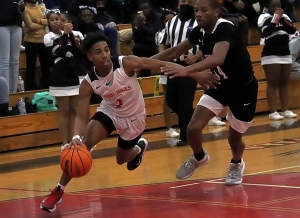 Druid Hills’ Karon Strickland (1, shown here in action from earlier in the season) had 16 points as one of four Red Devils in double figures in a 72-44 Class 4A boys’ Sweet !6 playoff win at Druid Hills on Saturday. (Photo by Mark Brock)

The No. 8 ranked Druid Hills Red Devils defeated Perry 72-44 on Saturday night to be the last DeKalb team standing in the state playoffs while advancing to the Class 4A boys’ Elite 8 next week.

A big third quarter on both ends of the floor spurred the Red Devils (25-4) to a 46-30 lead after three quarters of play. Strong defensive play off the bench keyed the big run for Druid Hills in addition to the play of the quartet of Nicholas Majors, KaRon Strickland, David Sledge and Harry Gewirtz who all finished in double figures.

The great play continued into the fourth quarter as Druid Hills continued to pull away to the 72-44 final. Majors led the way with 19 points followed by Strickland with 16, Sledge with 13 and Gewirtz 11.

Druid Hills will host the No. 1 ranked McDonough Warhawks (25-2) on Wednesday. McDonough defeated Benedictine 69-42 to advance into the Elite 8. The two top 10 ranked teams face off at 7:00 pm on Wednesday. 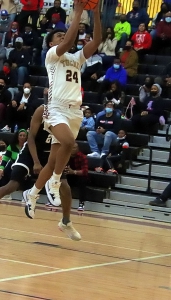 Tucker’s Asaad Lawson (24) goes in for a layup during second half action of Tucker’s 78-61 Class 6A boys Sweet 16 playoff loss on Saturday. (Photo by Mark Brock)

Class 6A Boys
The No. 4 ranked Tucker Tigers were outshot by the No. 6 ranked Kell Longhorns in a 76-61 loss that ended their season on their home court on Saturday night.

Kell (20-10) used the three-point line to their advantage hitting nine on the night including a barrage in the final 3:14 of the first half to take control of the game up 37-30 at the half.

Tucker was leading 28-27 when a turnover led to the first of Connor Staphylaris’ two three-pointers in those final minutes to start a 10-0 run. Jalen Colon hit another just 20 seconds later to extend the lead. Colon’s second three came with 47 seconds left to make it 37-28.

Christian Yeates hit the first free throws attempted by Tucker to make it 37-30 at the half.

Tucker (22-5) got on track late in the third quarter cutting the lead to 48-43 as a Yeates three-pointer along with a basket and free throw by Asaad Dawson pulled the Tigers within striking distance.

Kell’s Colon slowed the Tucker momentum as he was fouled on a made three-pointer and completed a four-point play.

Tucker got within six twice more, but nine consecutive free throws by the Longhorns squelched any comeback by the Tigers.

Tucker got 15 points from sophomore Josiah Lawson to lead four Tigers in double figures including Raylan Barrion 13, Chris Whitmore and Asaad Lawson 12 each.

Class 3A Boys
The Redan Raiders gave the No. 10 Johnson-Savannah Atomsmashers all they wanted before falling 52-46 in their Sweet 16 battle in Savannah on Saturday.

Tied at 22 at the half, the Raiders (13-13) came out in the third to pull ahead. Alfolabi Caulker’s three-pointer late in the third quarter put the Raiders up 39-35 going into the fourth quarter.

Class 2A Boys
The No. 2 ranked Columbia Eagles’ season came to an end in Augusta as Westside used a big second half to pull way to a 82-72 win to advance to the Elite 8.