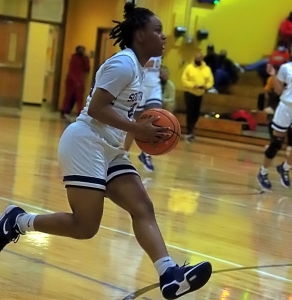 Southwest DeKalb senior Alex Jackson drives inside the three-point line during second half action in a 59-32 loss to Forest Park on Friday night in the Class 5A Sweet 16 playoffs. (Photo by Mark Brock)

A trio of DeKalb basketball teams were on the court tonight in Sweet 16 state playoff action only to come up short on the scoreboard to end their seasons.

The only team playing at home was Region 5-5A champions Southwest DeKalb Lady Panthers who could not overcome the hot shooting and height of the Forest Park Lady Panthers in falling 59-32 to see their season come to an end in the Sweet 16.

Forest Park (20-6) hit 8 of 15 from the floor in the second quarter, including three from behind the three-point arc by Yasmine Allen, as the game got away from Southwest DeKalb.

Forest Park had five players 6-0 or better and another 5-11 and used that height to out-rebound the home team 18-8 in the first half to go along with the hot shooting from the field.

The second quarter was the big turning point in the game following a drive by Southwest DeKalb’s Janiya McCoy that cut Forest Park’s lead to 14-11 as the other Panthers went on a 19-0 run to take control at 33-11.

Allen hit her third three of the quarter and third in the final 2:14 of the half as she lofted a shot from halfcourt that banked off the glass and into the net at the buzzer to make it 36-16 heading into the break.

Allen hit her fourth three-pointer of the night with 40 seconds left in the quarter to put the lead back at 20 (45-25) with a quarter to play.

Southwest DeKalb played five freshmen and two sophomores most of the game due to foul trouble with sophomore Brooklyn Scrubb leading the way with 8 points and 8 rebounds. Freshman Janiya McCoy had eight points.

CLASS 5A BOYS
The Lithonia Bulldogs went on the road to Tri-Cities in Class 5A boys Sweet 16 playoff action and had one get away 60-59 to have a good season come to an end.

Lithonia trailed the entire first half before coming alive in the third quarter. Tri-Cites led 36-28 coming out of the half when the Bulldogs Caleb Taylor and Josh Daniels caught fire.

Tri-Cities jumped in front 54-51 before a Taylor three-pointer knotted the game with 3:17 remaining. Lithonia was trailing 58-56 with just 25 seconds to play and came up short 60-59 as Tri-Cities got a nice break in the waning seconds to pull out the win.

CLASS 4A GIRLS
The Stephenson Lady Jaguars went on the road to Milledgeville and gave No. 3 ranked Baldwin all it could handle before falling 71-63 in their Class 4A girls Sweet 16 matchup.

Stephenson (17-11) led for almost three quarters of the game before Baldwin (25-2) got control of the game to rally for the victory. Senior Kelli Finkley, a University of Detroit signee, went down fighting as she had 18 points to lead Stephenson in the game. Brianna Spruill was close behind with 17 points for the Lady Jaguars.

Finkley finished her career with 1,042 points, including 429 during her senior campaign.