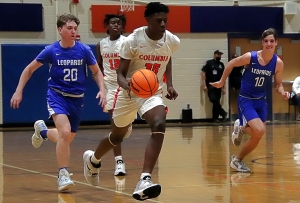 Columbia’s Mekhi Turner (35) gets the ball up court against Banks County during the Eagles Class 2A state playoff 71-40 win over the Leopards. (Photo by Mark Brock)

The Columbia (boys), Redan (boys), Southwest DeKalb (girls) and Stephenson (girls) picked up first round wins Tuesday to advance to the Sweet 16 of their respective state tournaments.

Leading 22-18, Columbia’s Rashead Headges nailed a three-pointer to start an 8-0 run in which Mason Lockhart would add three-points and Terrell Wright two as the lead ballooned to 30-18.d

Hunter Youngblood hit his second three-pointer of the half to score Banks’ final points of the first half before the Eagles went on a 7-0 run fueled by four points from Kevin Brice to take a 37-21 lead into the half.

Columbia added to the late first half run with seven quick points to open the second half. Wright had a put-back off the board to start it and was followed by a Headges pull up from about 16 feet and a three-point play by Jamari Piercy to stretch the lead to 44-21.

Amir Green-Jones caught a pass from Piercy as the clock wound down to 1 second and hit a deep three to give Columbia a 60-31 lead with a quarter to play.

Mekhi Turner snagged an offensive rebound and sent it back into the basket with a big flush to open the fourth quarter. Green-Jones added another three and Turner another offensive put back as the lead grew to 67-31.

Brady Mick would hit two three-pointers and Luke Dale another to round out the scoring for Banks.

Dakota Ivey and Hunter Youngblood both had 9 points for Banks.

Columbia advances to play the winner of Westside-Augusta (23-3) and Jeff Davis (14-11) later this week.

Class 3A
Redan 72, North Hall 69
The Redan Raiders traveled to Gainesville and rallied for a thrilling 72-69 overtime win against the No. 1 seeded North Hall Trojans to advance to the Class 3A Sweet 16.

Trailing by 11 with 5:50 to play in the game, the Raiders (13-12) turned the momentum in the game when Christian Kenerly made a steal and went in for a dunk to cut the lead under 10 points. Redan used the momentum changing moment to send the game into overtime tied at 62.

The Trojans were up 66-65 with 45 seconds to play when Afolabi Caulker sank a three-pointer to give Redan a 68-66 lead. The Raiders hit four free throws down the stretch to seal the victory.

Redan moves on to another road game and will face the winner of Tattnal County (19-6) and Johnson-Savannah (15-10) later this week. 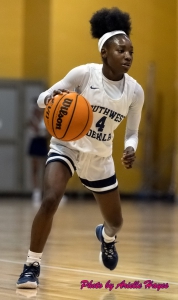 Southwest DeKalb’s Janiyah McCoy had a big three-pointer to put the Panthers ahead for good in the third quarter of their Class 5A state playoff 33-21 win over Blessed Trinity. (Photo by Arielle Hayes)

Blessed Trinity was up early in the third quarter when freshman Janiya McCoy hit a step-back three-pointer to put the Panthers ahead for good at 18-17.

Southwest DeKalb’s defense took control of the game allowing Blessed Trinity just four points (2 free throws, one basket) the rest of the way. The Panthers had 11 points in the fourth quarter all from the free-throw line to seal the win.

Kelli Finkley led the way with 19 points for Stephenson (17-10). Zoey McMickens and Taj Hunter both hit for 10 points in the win.

Stephenson must go on the road in the second round to face Baldwin (24-2) in Milledgeville in the Sweet 16. 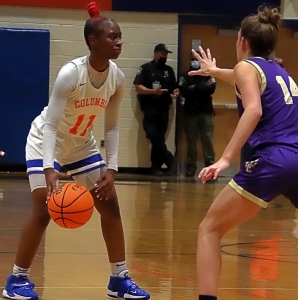 Columbia’s Tekiarah Jones (11) keyed a late comeback attempt by the Lady Eagles that fell short in their 54-49 Class 2A first round loss at home to Union County. (Photo by Mark Brock)

Class 2A Girls
Union Co. 54, Columbia 49
The Columbia Lady Eagles fell behind by as much as 17 points as a late rally fell short in a 54-49 Class 2A first round loss to the No. 4 seed Union County at Columbia on Tuesday.

Tekiarah Jones and Erica Richardson got things going for Columbia. Jones hit a pull up jumper just inside the three-point line to start a 6-0 run in which Richardson had back-to-back baskets to close the gap to 50-44 with 2:15 to play.

Another Hunter free throw made it 51-44 before Keamaura Robinson got an offensive rebound and put it back in to start another 6-0 run for the Eagles. Jones hit back-to back baskets following a pair of Union County turnovers and the lead was down to 51-49 with 27 seconds to play.

Rebeka Chambers hit both free throws with 6.6 seconds to play to seal the win for Union County.

Ava Hunter hit for 25 points and grabbed 11 rebounds while Chambers finished with 14 points and 9 rebounds.

Adia Bouldin finished with 15 points and 8 rebounds to lead the Vikings.

Six more DeKalb teams get an opportunity to reach the Sweet 16 with games on tap on Wednesday night.

The Druid Hills, Lithonia and Tucker boys all play home games tonight while the Redan and Stone Mountain girls and the Southwest DeKalb Panthers go on the road.

See the schedule below: