Columbia Sweeps Lovett Teams to Advance to 6-2A Championship Games 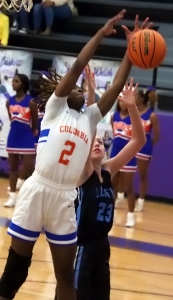 Columbia’s Nia Anderson (2) pulls down a rebound against Lovett’s Allie Steel during Columbia’s Region 6-2A semifinal win at KIPP. (Photo by Mark Brock)

It was a Columbia vs. Lovett doubleheader tonight in the 6-2A tournament semifinals KIPP Atlanta Collegiate with both Columbia Eagles boys’ and girls’ teams advancing to the championship games on Saturday.

The Lady Eagles (20-6) jumped out to a 9-0 lead on the Lovett Lions (18-9) and never looked back on the way to a 54-36 victory in the girls’ semifinal to open play at KIPP. Columbia’s defensive pressure had Lovett off balance from the beginning as the Lady Lions would turn the ball over 29 times in the game.

Columbia’s Nia Anderson opened the scoring with a three-pointer and followed with back-to-back jumpers in the lane on assists from Tekiarah Jones to make it 7-0. Jones drove for a basket of her own to push the lead out to 9-0 with 3:48 remaining in the opening period.

An 11-2 run to open the second quarter of play was jumped started by Keamaura Robinson’s three points. Lovett’s Eloise Diffley hit a pair of free throws before Anderson scored two quick baskets, the second on a steal and layup with 3:19 to play. Anderson got another steal and fed up the court to Jones for an easy basket. Jones followed up with her own steal and layup to push the advantage to 22-5.

Carmin Florence had a pair three-pointers in the final 1:58 of the first half to send the Lady Eagles into the half up 30-12.

Jakiah Slaughter’s rebound and basket with 2:28 left in the third quarter made it 40-18 before two quick baskets by Allie Ohde made it 41-24 with one quarter to play.

After a rough start to the fourth quarter Columbia’s Brianna Culpatrick hit a layup on an assist by Kamri Gilbert on a fastbreak and followed it up with a three-pointer as the lead went back over 20 at 48-26 with 4:17 to play.

Tekiarah Jones led three Lady Eagles in double figures on the night with 14 points to go along with Nia Anderson’s 13 points and 9 rebounds and a double-double of 11 points and 12 rebounds by Keamaura Robinson. Allie Ohde had 17 points to lead Lovett and Allie Steel contributed 10 more.

Columbia plays at 7:00 pm championship game on Saturday at KIPP against Pace Academy (16-6), a 50-30 winner over South Atlanta (12-11). South Atlanta and Lovett meet in the consolation game to see who gets the No. 3 seed. 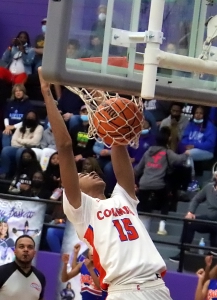 Columbia’s Jamari Piercy gets a break-away dunk to open the fourth quarter in Columbia’s Region 6-2A semifinal win over Lovett. (Photo by Mark Brock)

BOYS: Columbia 77, Lovett 66
Five Eagles scored in double figures as Columbia pulled away late from a hot-shooting Lovett Lion squad for a 77-66 victory and a trip to the 6-2A title game on Friday at 8:30 vs. the Pace Academy/Therrell winner.

Columbia trailed four times in the first half due to the outside shooting of the Lions (15-11) before the Eagles went inside to senior post player Mason Lockhart on two consecutive trips down the floor to go up 35-32 with 3:08 reaming in the first half.

The Eagles (24-3) would never trail again even though a Nikh Edupugonti three cut the lead to 47-46 with 4:18 left in the third quarter. Columbia answered with three consecutive baskets from Jaden Baugh, Jamari Piercy and Kevin Bruce to push the lead out to 53-46 in just under two minutes of time going off the clock.

Lockhart’s drive and basket with one second left in the third quarter gave Columbia a 58-51 lead with one quarter to play and started a 10-run that went into the fourth quarter.

Piercy had an emphatic dunk to open the final quarter of play and Lockhart followed with a turn-around jumper at the edge of the lane and two free throws as the lead began to grow. Piercy’s layup on a nice pass from Jaden Baugh made it 66-51 with 5:25 remaining on the clock.

A pair of dunks by Lockhart gave Columbia a comfortable 77-59 lead with 1:13 to play. Lovett would get seven points in the final minute to close it to 77-66.

Lovett had 30 points from behind the three-point arc in the game on 10 threes including on with one second to play in the opening period by Nikh Edupugonti to tie the game at 18-18 heading into the second quarter.

Mason Lockhart finished the night with 24 points and 9 rebounds to lead Columbia’s quintet in double figures. Jamari Piercy finished with 16 points and 12 rebounds, Daquavious Harrison with 11 points and 10 points each by Rashead Headges and Jaden Baugh.

Lovett had three players in double figures led by Kyle Walters with 26 points and 10 rebounds to lead the way. Christian Anderson hit for 21 points and Nikh Edupugonti 14.