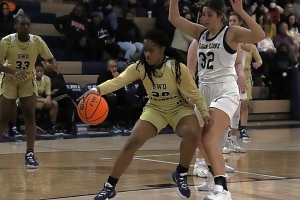 Southwest DeKalb’s Brooklyn Scrubb (20) dribbles inside of St. Pius’ Annabelle Sheridan (32) during second half action of the Lady Panther’s Region 5-5A 48-41 loss on Friday night. (Photo by Mark Brock

Southwest DeKalb had a tough night rebounding at Senior Night for St. Pius X on the way to a pair of Region 5-5A losses in the regular season finales on Friday night.

A 39-19 rebounding deficit proved costly to the region leading Southwest DeKalb Lady Panthers (16-9, 15-1) as the St. Pius Lady Golden Lions (16-9, 14-2) got more opportunities with the ball and limited the number of shots Southwest got in the game.

Alex Schiavo was the catalyst with seven points in a three-minute span, including a three-pointer with 4:00 left in the period to push the lead to 31-24.

Londyn Durden cut the lead to four with a shot from the right wing with 52 seconds left in the quarter, but a basket by Annabelle Sheridan with 20 seconds on the clock hit a layup to help St. Pius to the five-point lead heading into the fourth quarter.

A three-pointer by Alex Jackson and a basket by Aalon Turner on a nice entry pass by Jackson cut the lead to 41-40 with 3:19 to play in the game.

St. Pius answered with a 7-1 run to finish the game aided by a pair of offensive rebounds and hitting 5 of 10 from the free throw line as the Panthers were forced to foul late.

Londyn Durden led the Panthers with 10 points in the game and Alex Jackson added 9 points and 5 rebounds. St. Pius got an 11-point, 10 rebound performance out of Alexia Kenah, 9 points and 12 rebounds from Payton O’Bryant and nine points and 8 rebounds from Kelly Stephinson. 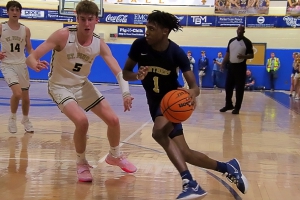 BOYS: St. Pius X 57, SW DeKalb 49
St. Pius used a similar formula in the boy’s contest outrebounding Southwest DeKalb 30-20 along with some pinpoint shooting from behind the three-point arc on the way to a 57-49 victory.

The Golden Lions (22-3, 15-1) opened the game hitting four three-pointers, two by Grant Rowe to open the game and two more by Eamon Kenah to get out to a 14-8 lead with just about 1:30 left on the first quarter clock.

Xzaviah Taylor’s layup pulled the Panthers (19-6, 13-3) within 14-10 with 52 seconds remaining in the quarter, but Spencer Elliott got a layup with one second to left to give St. Pius a 16-10 lead heading into the second quarter.

Andrew Oliver hit a t here-pointer with three-minutes in the half to give St. Pius a 30-12 advantage to complete a 10-0 run. Ethan Harman’s basket with 31 seconds to go in the first half sent the Lions into the break up 32-15.

Pius extended the lead to 48-27 after three quarters by using its rebounding prowess to build on its lead as six different players scored in the quarter and Rowe added his third three-pointer of the night.

The Panthers went on a 10-0 run in the final 1:51 of the game led by seven points by Messiah Morgan, one three, and a three pointer by Devon Long to close the gap to the final 8 eight points.