Saints Shut Down Cougars 28-6 to Reach Class 3A Semifinals 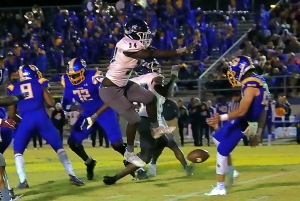 Arkansas commit Rashod Dubinion rushed for 266 yards and three touchdowns to lead the No. 5 ranked Cedar Grove Saints to a 28-6 victory over their former Coach Miguel Patrick’s Crisp County Cougars at Crisp County on Friday night.

The Saints defense shut down the Cougars offense holding them to two field goals and 185 yards of total offense in the victory to advance to the Class 3A semifinals for the sixth time in the past seven seasons.

Cedar Grove (10-3) forced Crisp (9-4) to punt on the first possession of the game and behind a 59-yard run by Dubinion marched 97 yards to take the lead for good. Colson completed the 10-play drive on the as he kept and dashed up the middle into the end zone for the opening touchdown of the game. Amari Forted tacked on the PAT to make it 7-0 with 4:41 to play in the first quarter.

The Cougars answered by driving for a 29-yard field goal by David Mitchell to cut the lead to 7-3 with 11:46 to play in the first half. Crisp had gotten into a first and goal at the Saints’ two-yard line, but consecutive tackles for a loss by Ventrilo Dunlap (-3 yards) and Christian Miller (-2) forced Crisp to pass. The pass was overthrown and the Cougars settled for the Mitchell field goal.

A big special teams play with 4:21 to play gave the Saints an opportunity to score before the half as Everett Roussaw broke through to block a Mitchell punt and the Saints got the ball at the Crisp 17.

Colson connected with Janiran Bonner for nine yards and a big third down conversion down to the Cougars’ two yard line. Dubinion finished off the drive with a two-yard plunge into the endzone with 2:59 left in the half. Forte’s PAT made it 14-3 Saints.

The Saints blocked another punt on Crisp’s next possession but an illegal touching penalty on what would have been a first and goal at the five cost the Saints as they failed to score as a 40-yard field goal attempt fell just short.

Crisp grabbed some momentum after halftime as CJ Jones intercepted Colson on the second play of the half giving Crisp the ball at the Cougars’ 47. A 24-yard pass play from Carter to Jamarion Chambliss and a 15-yard run by Marquise Palmer had the Cougars knocking on the door. 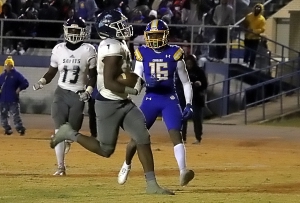 Cedar Grove’s Rashod Dubinion (7) cruises into the touchdown on a five-yard run around the left end late in the fourth quarter. (Photo by Mark Brock)

A big sack by Quinterio Lawson on third and 12 at the 16 forced the Cougars to go for a 40-yard field goal which Mitchell hit to cut the lead to 14-3 with 8:13 left in the third quarter.

Crisp looked to have the momentum driving to the Cedar Grove 48 where Trevon Ferrell broke up a fourth down pass by Carter to give Cedar Grove the ball on downs.

The Cougars blocked a Saints’ punt with 10:58 to play in the game trailing just 14-6 got the football on the Saints’ 25. Two plays later Kayin Lee intercepted in the endzone to end the threat.

Cedar Grove responded by driving 80 yards to score another touchdown. Dubinion had 37 yards on the ground in the drive. He went around the left side on a five-yard race into the endzone with 5:26 left in the game. Forte hit another PAT to extend the lead to 21-6.

Crisp answered with a drive to the Saints 20, but four incomplete passes gave Cedar Grove the football with the opportunity to r un out the clock. Instead, a handoff to Dubinion up the middle as the Cougar middle of the defense parted like the Red Sea to allow Dubinion to race 80-yards for the score. Forte hit the PAT to make it a 28-6 score in favor of the Saints.

A squib kick into the middle of the field was recovered by the Saints and they ran out the clock for the win.

The Saints defense finished the night with 12 tackles for a loss, including three sacks, to help limit the Cougars to just 185 yards of total offense.

Cedar Grove returns home this coming Friday with the host role against Appling County (12-1) on 7:30 pm at “Buck” Godfrey Stadium. Appling County defeated Thomson 21-7 to advance to the semifinals.