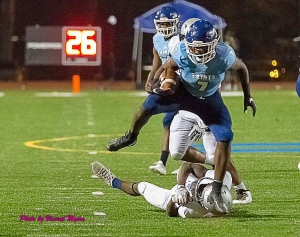 Cedar Grove’s Rashod Dubinion (7), shown here vs. Redan, had a pair of touchdowns to help lead the Saints to a 48-10 Class 3A second round playoff win this past Friday at “Buck” Godfrey Stadium. (Photo by Vincent Myers)

Quarterback Elliot Colson had a hand in four touchdowns to lead the No. 5 ranked Cedar Grove Saints to a 48-10 Class 3A Sweet 16 victory over the Southeast Bulloch Yellowjackets at “Buck” Godfrey Stadium on Friday night.

The Yellowjackets took an early 3-0 lead on a Cole Snyder 37-yard field goal with 1:00 left in the first quarter, but it would be short lived as Colson put the Saints ahead for good just 1:36 later on a five-yard quarterback draw with 11:24 to play in the first half. Amari Forte tacked on the PAT to make it 7-3.

Three minutes later Colson dropped back and hit Trevon Ferrell on a 50-yard touchdown pass play. Forte again connected on the PAT to put the Saints up 14-3 with 8:20 to play.

Rashod Dubinion got into the act for Cedar Grove as he took the ball into the endzone on a six-yard run with 2:38 remaining in the half. Forte’s PAT made it 21-3.

Southeast Bulloch got it’s last score of the game as the first half came to an end on a 25-yard touchdown pass from Khristian Clark to Tyler Griffin. Snyder’s PAT made it 21-10 at the half with the Saints leading.

Dubinion picked up his second touchdown of the game with 6:30 to play in the third quarter as he broke off a 45-yard touchdown run. Forte pushed the lead to 28-10 with his PAT.

Three minutes later Colson got into the endzone for the second time on a one-yard run to extend the lead to 34-10. Colson and Ferrell hooked up again late in the third quarter as Ferrell took a screen pass nine-yards for the touchdown. Forte added the PAT to make it 41-10 heading into the fourth quarter.

Bo Walker closed out the scoring with 9:47 to play with a 24-yard run into the endzone. Forte hit his sixth PAT of the night for the final of 48-10.

Cedar Grove (9-3) moves on to the quarterfinals for a rematch of the 2020 nail biter with Crisp County (9-3). The Saints fell 16-13 as a late drive was stopped. Cedar Grove had defeated Crisp 21-14 in the 2019 state title game and 55-0 at Crisp in 2016 on the way to a state title. This makes six consecutive seasons for the Saints to reach the quarterfinals.

Crisp County is on a nine-game winning streak heading into the rematch as former Cedar Grove head coach Miguel Patrick leads the Cougars against his former charges.

Cedar Grove travels to Cordele to take on Crisp at 7:30 pm on Friday. Crisp plays its football games at the middle school.

CLASS 2A – Swainsboro 41, Columbia 14
Swainsboro scored 20 unanswered points in the second half to pull away to a 41-14 Class 2A second round playoff victory over the Columbia Eagles on Friday in Swainsboro.

Swainsboro came back with a touchdown pass to take a 21-7 lead into the half.

Columbia cut the lead to one score again on a 20-yard touchdown run by Lamaze Williams in the third quarter to pull within 21-14.

Swainsboro then went or the 20 unanswered to put the game away.

Columbia ends it season at 8-4, but picked up its first playoff win since 1997 with its win over Elbert County last week.