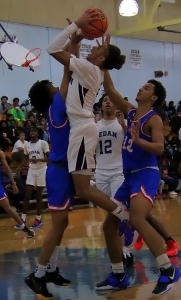 Redan’s Christian Kenerly (with ball) had a game-high 24 points to lead the Raiders to a 66-64 double-overtime win over Heritage at Redan on Tuesday night. (Photo by Mark Brock)

Redan’s high school basketball home openers provided fans with plenty excitement as the Raiders rallied in the second half to win an exciting double overtime game 66-64 against the Heritage Patriots to complete the sweep at Redan on Tuesday night.

Xavian Green’s three-pointer with three seconds left in the first overtime tied the game to keep Redan in the position to pull off the win tied at 59 going into the second overtime.

The Raiders jumped out to a 63-59 win as a pair of Heritage turnovers led to a stick back basket by Taron Williams and two free throws by Christian Kenerly with 2:46 to play in the game.

Heritage answered right back using a turnover by the Raiders to get a basket by Greg Kearney who drove the floor for a layup and an offensive rebound basket by Jalen Boston to knot the game at 63-all with 1:53 remaining

After inbounding the ball and almost turning it over, the Raiders’ coach Greg Wood called a timeout. The Raiders came out of the timeout and got the ball up the court to Kenerly who drove the lane for a runner with 35 seconds to play for a 65-63 lead for Redan.

Gabe Guilford was fouled on the other end and hit one of two free throws to pull Heritage within one with 13.7 seconds to play.

Redan forced a jump ball and took possession with 9.1 seconds to play. Alfo Caulker was fouled and went to the line for two shots with 6.8 seconds to play. He hit one of two to give Redan a 66-64 cushion.

Heritage got the ball into the hands of Kearney who weaved up the floor and headed to the basket with a pair of Redan defenders trying to cut him off. He lifted a shot that rolled off the rim and Caulker tipped the ball back down the court to run out the clock giving the Raiders the win.

Redan trailed 46-36 heading into the fourth quarter as JD Davis closed the gap from 46-32 with a pair of baskets in the final 38 seconds.

A three-pointer by Tay Roland with seven minutes to play started a 10-0 run by the Raiders to close the gap to 48-46 with just 3:20 remaining in the game.

A dunk off an offensive rebound by Heritage’s Jamie Aleem with 1:26 to play looked to have given the Patriots the needed insurance at 52-46.

The Raiders had other plans as Davis converted a three-point to cut the lead in half. Heritage missed three free throws and Davis connected on a three-pointer from the corner to knot the game at 52 with 23 seconds left.

Kenerly had the opportunity to put Redan up with 9.2 seconds to play, but his front end of a one-and-one rolled off. The Patriots fumbled the ball out of bounds on the other end and the game was headed to overtime.

Terrance Moore finished with 19 points before fouling out for the Patriots (0-1) and Jalen Boston had a 16-point, 16-rebound double-double. 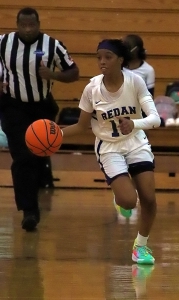 Redan’s Jayla Cook scored 18 points and grabbed 10 rebounds in leading the Lady Raiders to a 47-44 win over Heritage in the girls’ opening game on Tuesday. (Photo by Mark Brock)

(G) Redan 47, Heritage 44
Jayla Cook hit a pair of free throws after being intentionally fouled with 13.9 seconds left to help seal a 47-44 come-from-behind win for the Redan Raiders over the Heritage Patriots in the night’s opening girls’ game.

Heritage regained the lead as Morgan Snipes was fouled and a technical was called on Redan. Snipes went to the line for four free throws but only hit two to give Heritage the lead back at 44-42. Heritage inbounded the ball after the free throws only to turn it over with 42.4 seconds to play.

Redan got the ball up the court and Kennedy Daniels hit her third trey of the night with 22 seconds to play giving Redan a 45-44 lead.

A foul was called on Redan as Heritage moved the ball up the court to send Snipes to the line again. She missed the front end of the one-and one with 16. 4 seconds to play. Cook rebounded the ball and moved up the court before being intentionally fouled with 13.9 seconds remaining

Heritage took a 20-19 lead into the half on a basket by Zaria Gillespie with 13 seconds to play in the second quarter. The Patriots then opened the second half with a quick 5-0 spurt on a basket by Gillespie and a three-pointer by Jaliya Weekes to go up 25-19.

Cook had a steal with 2:24 left in the third to give Redan its first lead since just before the half at 30-29. A three by Cook and a layup by Cooper on a feed from Cook sent Redan into the fourth quarter with a 35-31 advantage.

Heritage regained the lead twice in the fourth quarter taking a 42-39 lead with 2:48 to play on a basket by Weekes before Cooper’s three-started Redan on its final rally for the win.

Cook finished the night with a double-double of 18 points and 10 rebounds to lead Redan and Cooper added 13 point and six rebounds.

Heritage (0-1) had three players in double figures led by Snipes and Weekes with 15 points each. Gillespie chipped 11 more for the Patriots.