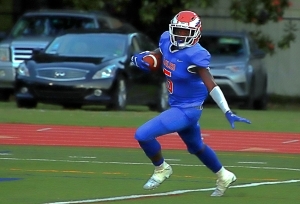 Columbia’s Royce Tolbert had a pair of big plays in the first half to key the Eagles’ 21-14 win over Pace Academy in their Region 6-2A opener. (Photo by Mark Brock)

Region games determine your playoff fate, and the Columbia Eagles and Towers Titans got a good start by winning their first region matchups of the season on Friday night.

Royce Tolbert played a big role on both sides of the football in the Eagles 21-14 win over the Pace Academy Knights at Avondale Stadium on Friday night in the first meeting between the two football programs.

Pace rallied back to take a 7-6 lead early in the second quarter and drove deep into Columbia territory again when the Eagles defense stiffened and forced a field goal try by the Knights (0-3, 0-1).

Tolbert was again a thorn in the side of the Knights as he blocked the field goal attempt and the Eagles put together a drive deep into Pace territory as the first half was winding down. Tywan Bryant gave the Eagles the lead for good with a 25-yard field goal with nine seconds remaining in the half to make it 9-7 heading into the break.

Columbia quarterback Elijah Morgan extended the lead to 15-7 in the third quarter as he got free on a 66-yard touchdown run. The PAT was no good with 2:23 remaining in the third period.

The Eagle defense got into the act on Pace’s next possession as Kenyon Partridge forced a fumble on a sack of the Pace quarterback. Laquavious Oliver scooped up the football and returned 11 yards for a score to provide the Eagles a 21-7 lead with 53 seconds left in the third quarter.

Pace closed the gap to 21-14 with 2:31 left in the game. Columbia took over at that point picking up a first down to run out the clock and close out the victory.

The Titans’ defense got the Titans on the board first in the opening period as Tyler Waters returned a fumble 35 yards for a 6-0 Towers lead. The PAT was no good.

Logan got into the act in the second period scoring on a 10-yard run and then passing to Keshawn Weathers for the two-point conversion to make it 14-0 heading to halftime.

The Logan to Weathers connection clicked again in the third quarter as the pair hooked up on a 42-yard touchdown pass play to extend the lead to 20-0 as the teams went to the fourth quarter.

Towers (1-2, 1-0) sealed the game in the fourth quarter as Logan hooked up with Elijah Hobson on a 35-yard scoring toss. Eh-Wah-Elu hit the PAT for final margin of 27-0. 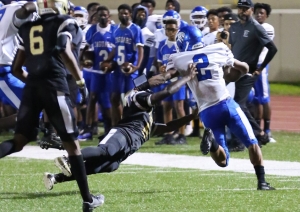 Stephenson’s Cordell Andrews (2) had a pair of interceptions and a big punt return to set up the Jaguars’ winning touchdown in a 20-14 win over DeKalb rival Tucker. (Photo by Vincent Myers – Vincent Myers on Facebook
shawtcut_shoots_photography on Instagram)

Stephenson 20, Tucker 14
The No. 10 ranked Stephenson Jaguars broke a 14-14 tie with 6:13 to play on a Cheik Keita nine-yard touchdown run to pull out a tough 20-14 victory over the DeKalb rival Tucker Tigers at Hallford Stadium on Friday night.

Stephenson and Tucker were knotted at 14-14 when the Jaguars forced a Tucker punt from deep in its own territory with over half a quarter to play. Cordell Andrews who had a pair of interceptions in the game came up big for the Jaguars again as he retuned the punt 46 yards to set up Keita’s game-winning touchdown to make it 20-14.

Tucker got inside Stephenson territory on its next drive, but Jaguars Jemal Foster recovered a fumble with 4:36 to play and Stephenson began a drive to the Tucker 8. The Tigers’ defense stiffened at that point to give the offense the ball back with two minutes to play.

With 10 seconds to play quarterback Amir Streeter got loose on a scramble for a 34-yard game to the Stephenson 20 where Dezmond Buchanan tackled him as time ran out.

Stephenson opened the score with a 49-yard drive capped by a 10-yard touchdown pass from Marte Barton to Samauri Sutton with 7:06 left in the first half. Etsomefa Elavewo added the PAT for a 7-0 Jaguars’’ lead.

Tucker answered on the first play following the kickoff as Streeter connected with Cole McKinney on a 67-yard touchdown pass. Charlie Cooper’s PAT knotted the game at 7-7 with 6:47 left in the period.

A 37-yard run by Keita set up the Jaguars’ go-ahead score before the half. A 20-yard touchdown pass from Barton to Rahim Diarrassouba and a Elavewo PAT made it 14-7 at the half.

Cordell Andrews stopped a Tucker drive just before half with an interception with the Tigers knocking on the door at the Stephenson five-yard line.

The Tigers came out in the second half to knot the score on a one-yard run by Streeter with 9:16 left in the third quarter. Cooper’s PAT knotted the game at 14-14 heading into the fourth quarter.

Stone Mountain 21, Redan 6
A battle of undefeated teams took place at North DeKalb Stadium on Friday night with the Stone Mountain Pirates rallying in the second half to knock off the Redan Raiders 21-6.

An Antoine Hector 13-yard pass to Jamir Jones gave the Raiders a 6-0 lead in the early going which held up until the third quarter.

Stone Mountain’s defense put the Pirates (3-0) on the board as Ali Diakite has a sack in the end zone for a safety to trim the Redan lead to 6-2.

Third quarter touchdown runs by Hakeem Thornton and Devante Cemexan put the Pirates ahead 15-6 heading into the fourth quarter.

Thornton sealed the victory in the fourth quarter with his second touchdown run of the game for the final of 21-6.

See the rest of the Week 4 results in the listing below: