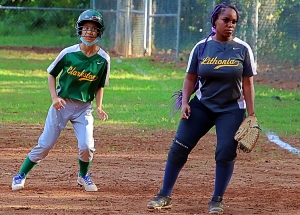 A big nine-run fourth inning sealed a 22-10 Region 5-5A win for the Lithonia Lady Bulldogs over the Clarkston Lady Angoras in high school girls fast pitch softball action at Clarkston on Thursday.

Leading 10-7 heading into the top of the fourth inning Lithonia struck for nine runs to take a commanding 19-7 lead. A pair of Clarkston errors and a walk set the table for Lithonia’s Jasmine Green who hit a two-run double that kick-started the big inning.

Back-to-back RBI singles by Di”jah Dawson and Destiney King extended the lead. A Kaliyah Poole grounder scored another run and she reached on an error to push another run across.

Clarkston needing a run to prolong the game rallied in the bottom of the fourth to score a run on an error as Iyanna Cass came in to score. Lithonia’s Destiny King worked out of a bases-loaded jam with the aid of a strikeout as the game headed to the fifth inning with the Bulldogs up 19-8.

Lithonia made sure to close out the game in the top of the fifth with three more runs including a leadoff, inside-the-park home run by Green. The lead was 22-8 heading to the bottom half of the inning.

Clarkston’s Jasmine Adams led off the Angora half of the fifth inning with a hard hit triple to deep left-center. She would score on the play as a throw to third was wide. Cass reached on an error and scored on another miscue by the Bulldog defense to close out the scoring.

King closed out the game with her ninth strikeout as Lithonia improved to 5-7 overall and 4-5 in Region 5-5A. Clarkston fell to 0-7 on the season.

Lithonia took advantage of three walks and error to score three runs in the top of the first inning to take the lead they would never give up. A six-run second inning helped the Lady Bulldogs pull out to a 9-0 advantage keyed by RBI singles by Green, Shannon Brown and King.

Clarkston struck for seven runs in the bottom of the second inning to tighten the game to a two-run deficit. Daranaim Ismail-Mahamad grounded out to first for the second out of the inning, but drove in Haula Kamondo for the Angora’s first run.

Bases-loaded walks to Nevaeh Jones, Kamondo and Cass and an infield single to score a run by Adams spurred the Angora’s to close the gap to 9-7 heading into the third inning.