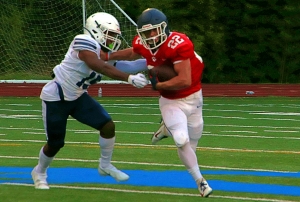 Two games are on tap for Friday with two of the new head coaches making their DeKalb debuts.

Tucker get the honor of playing the first game of the new season as new Tiger head coach James Thomson leads his squad into Gwinnett County to take on host Dacula at 5:30 pm as part of the 2021 Corky Kell Classic. Tucker went 3-5 in the shortened 2020 season falling to Lee County in the first round of the Class 6A state playoffs.

The first game in DeKalb County has Chamblee and first year coach Robert Swank leading the Bulldogs against North Springs in a 7:00 pm kickoff at North DeKalb Stadium to open the season. Swank was an assistant at Chamblee a year ago as the Bulldogs put together a 5-1 season, their first winning season since 2013.

Five games are on tap in DeKalb County stadiums on Friday night with all set for 7:30 kickoffs.

McNair is set to open the season by hosting Forest Park at Godfrey Stadium on Friday. The Mustangs are under the direction of first year coach Mario Drayton. McNair went 0-5 a year ago.

A big county battle is set for Hallford Stadium on Friday night as Stephenson hosts Lithonia. Former Lithonia head coach and Stephenson alum Marcus Jelks takes over the Jaguar program replacing his former coach Ron Gartrell who started the Stephenson program when the school opened. Stephenson went 4-3 a year ago and dropped a tough 28-24 decision to Northwest Whitfield in the first round of the Class 4A state playoffs. Lithonia also comes into the game with a new coach in Kevin Hill. The Bulldogs went 3-4 a year ago and finished just one-win shy of the state playoffs.

Dunwoody wraps up the home slate by hosting Decatur at North DeKalb Stadium on Friday. The Wildcats went 1-7 in their first year in Class 7A in 2020. Dunwoody showed flashes of a solid team in a 27-21 scrimmage win over Arabia Mountain last week.

Arabia Mountain has a new head coach this year as Julian Washington takes over the reins for the departed Stan Pritchett. Washington sent his squad through a scrimmage with Dunwoody last week and came up short 27-21. The Rams travel to Conyers to face off with Rockdale County, a 23-14 scrimmage winner over Towers last week. The Rams went 3-4 a year ago.

Towers is also opening the season under the direction of a new coach as Michael Johnson heads the Titans’ program this fall. The Titans are coming off a competitive 23-14 scrimmage loss to Rockdale County last week. Johnson is looking to improve on a 1-6 finish by the Titans last fall.

Cedar Grove, Clarkston and Redan are all off on this opening week of the season.