Vikings Knock Off No. 3 Ranked Central Gwinnett in Class 6A Playoffs 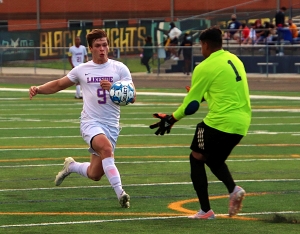 Lakeside’s Zach Martin (9) going after ball in front of Central Gwinnett’s keeper scored two goals in the game to lead the Vikings to a 3-1 Class 6A state playoffs victory. (Photo by Mark Brock)

Two goals in the final 12 minutes of play propelled the No. 7 ranked Lakeside Vikings to a 3-1 Class 6A soccer state playoffs victory over the Central Gwinnett Knights at Central Gwinnet on Wednesday night.

Lakeside (17-2-1) advances to the Class 6A Final Four next Tuesday against the winner of the Tucker/Dalton match set for Thursday night at 6:00 in Dalton.

Central Gwinnett had a pair of opportunities go by the wayside and Lakeside missed just high from out in front as the game remained tied heading under the 12:00 minutes left mark.

Lakeside got some pressure on the Knights’ defense and with 11:36 to play a foul and yellow card inside the box gave Lakeside the opportunity for a penalty kick.

Zetina put the kick in the upper right corner of the net over a diving Romero to give the Vikings a 2-1 lead.

Central Gwinnett pressed up the field and Marchisen fended off some tough shots as the clock ticked under nine minutes to play. Two in a 15 second span where he made a diving save that gave the Knights a corner kick. He followed it up with a grab off the corner kick. 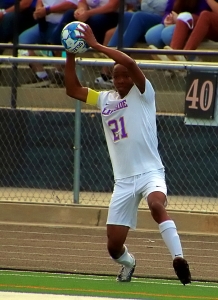 Lakeside’s Jalen Roberts makes a throw-in during the Vikings’ 3-1 Class 6A state playoff win over No. 3 ranked Central Gwinnett. (Photo by Mark Brock)

Following that last save he got the ball up the field to Martin who turned up field to find no one in front of him. He raced down the left hash, got the angle on the goalie and sent one over the diving defender from about 14 yards out to give the Vikings a 3-1 lead that would hold up for the win.

The two teams played to a 0-0 tie at the half with Lakeside having an eight-shots to four advantage. Central Gwinnett’s keeper Romero had five saves and three of the Vikings’ shots just missed.

Lakeside took just over seven minutes to score in the second half as Zach Martin got a pass out front from Brayan Zetina and blasted the ball into the net past a diving Romero for a short-lived 1-0 lead with 32:55 to play.

The Knights (16-3-1) knotted the game just over two minutes later as foul in the goalie box set up a penalty kick for Central’s Chris Sanchez who fired the ball over a diving Marchisen for the goal.