Lakeside, Tucker Advance to Class 6A Elite 8 With Sweet 16 Wins 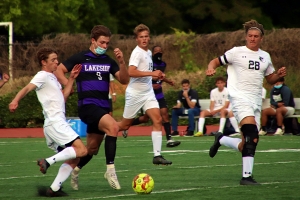 Lakeside’s Zach Martin (9) shown here against Houston County scored the opening goal for the Vikings to jumpstart their 3 goal run in the second half of the 3-0 win over Glynn Academy in the second round of the Class 6A boys’ state soccer playoffs. (Photo by Mark Brock)

The No. 7 ranked Lakeside Vikings and the Tucker Tigers came away with big road wins on Thursday in the Class 6A soccer state playoffs to move into the Elite 8 next Wednesday.

Zach Martin got the Vikings on the board with about 30 minutes to play. Mauricio Garcia followed at the 20-minute mark to give the Vikings a two goal advantage.

Garcia struck again with 7:30 remaining following a take away by Seiji Takeuchi on the left wing. Takeuchi dribbled to the end line, beat a defender and took a shot on goal which was deflected high. Garcia grabbed the opportunity and headed the ball into the goal to make it a 3-0 score.

Lakeside goalie Fin Marchisen got the shutout going the full 80 minutes with several big saves to keep Glynn off the scoreboard.

Tucker (10-10) traveled to Evans to face Lakeside (12-2-0) and came away with a thrilling 2-1 overtime victory to move forward in the Class 6A boys’ playoffs. 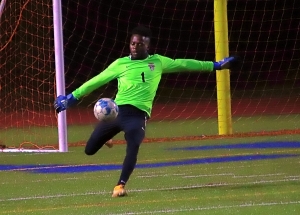 Tucker goalie Andrea Abwe and the Tigers face off with No. 1 ranked Dalton next Wednesday in the Class 6A boys’ state soccer playoffs. (Photo by Mark Brock)

A goal by Amedeo Issaya with about 13 minutes left in the first half gave the Tigers a short-lived 1-0 advantage. Lakeside answered just over a minute later on a corner kick that squeezed past the front post and defenders to knot the game at 1-1.

Neither team managed a goal in the second half to send the game into overtime tied at 1-1. The first 10-minute overtime period was also scoreless as the two teams’ defenses continued to play tough.

saya struck for his second goal of the game which would prove to be the game winner.

Tucker moves on with a date on Thursday at 7:00 pm against No. 1 ranked Dalton (17-0-2) which edged No. 4 ranked Riverwood 2-1 to advance. The game will be played at Harmon Field in Dalton.

Class 4A Boys
The No. 10 ranked Druid Hills Red Devils battled all season and it was no different on Thursday night as they took No. 4 ranked East Hall to the final horn before falling 2-1 in the Class 4A Sweet 16 matchup at East Hall.

East Hall scored an early goal in the second half to take the 2-1 lead and held off the Red Devils to get the victory.