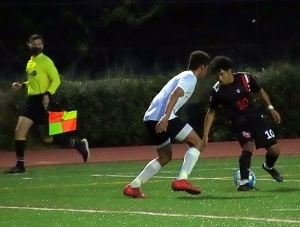 Druid Hills Dani Bibiano (10) makes a move against a Pickens defender during the Red Devils’ first round playoff victory on Friday night. (Photo by Mark Brock0

The Druid Hills Red Devils broke a scoreless tie at halftime with two second half goals on the way to a Class 4A boys’ state soccer playoffs win 2-1 over the Pickens Dragons on Friday night at Adams Stadium.

The two teams played to the scoreless first half tie behind some excellent goalie play in front of both nets. Pickens’ Jack Lowrie (7) and Druid Hills’ Rueben Angeles (5) combined for 12 saves in the first half with some great diving saves.

Druid Hills (9-9-1) got on the board with 30:27 left in the game as Dani Bibiano passed back inside to Alex Sabino who angled a shot towards the left post that Lowrie thought was going wide, but came inside the poll to put the Red Devils up 1-0.

It was more defense and a few tough shot attempts for most of the rest of the half until the Dragons (11-5-0) started keeping the ball in the Druid Hills end of the field. It almost paid off as a shot form the left side headed towards the right corner with the potential of tying the game with 3:25 to play.

Angeles did a fully extended dive to his left to knock the shot wide and preserve the tenuous 1-0 advantage. He would finish the game with nine saves in his shutout effort on the night.

Druid Hills got the insurance goal they needed at the 1:27 mark on Bibiano breakaway that resulted in a goal to extend the lead to 2-1.

Pickens’ goalie Jack Lowrie who made some tough saves himself throughout the game finished up with nine saves in the game including some diving saves of his own.

The win advances the Red Devils to the Class 4A Sweet 16 with a trip to East Hall (12-4-1) on the horizon. The game is scheduled to be played on Thursday, April 29 with a time to be announced.