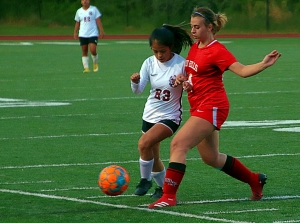 Marissa Gonzalez’s header into the net with 4:11 left in the first 10 minutes of overtime action propelled Southeast Whitfield past the Druid Hills Lady Red Devils in Class 4A girls state playoff action at Adams Stadium on Thursday night.

Tied 1-1 at the end of regulation Druid Hills and Southeast Whitfield went into the two, 10-minute overtime periods trying to break the tie.

Southeast got the ball deep into Druid Hills territory as the clock ticked towards the four-minute mark of the first 10-minute overtime period. The ball went out the end line last being touched by Druid Hills giving Southeast a corner kick.

The kick was sent high towards the middle of the field in front of the goal where Gonzalez leaped into the air and headed the ball into the net for the game-winner.

Teams have to play out the 20 extra minutes and Druid Hills had the opportunity to tie or go ahead in the game. A couple of late runs in the second of two overtime periods came close for the Lady Red Devils, but Southeast’s goalie Torre Llewellyn and the defense in front of her turned away Druid Hills (8-9-1) to secure the win.

Southeast scored first in the game after the two teams almost 58 minutes of scoreless soccer. Sonia Jimmenez put in the first goal of the game to put her team up 1-0.

Time was getting away from Druid Hills as the clock ticked under seven minutes. Elizabeth Fisher got free on the left side as Druid Hills tried to tie the game. Fisher fired a shot from left to right and Llewellyn knocked the shot away, but it went bounced away.

Sidney Cohen saw an opportunity and outraced Llewellyn to the ball to put in the game-tying goal to force overtime.