Chamblee Sweeps Cartersville Out of the Class 5A State Playoffs 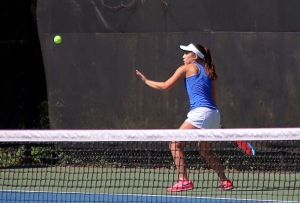 Chamblee’s Isabelle Coursey rolled to a 6-0, 6-0 win at No. 2 singles to start Chamblee off on a sweep of Cartersville in the Class 5A girls Sweet 16 state playoffs. (Photo by Mark Brock)

The Chamblee Lady Bulldogs won all five lines in knocking off the Cartersville Lady Hurricanes in the Sweet 16 round of the Class 5A Girls State Tennis Playoffs at Chamblee High on Wednesday afternoon.

Isabelle Coursey put the first point on the board for Chamblee cruising to a 6-0, 6-0 win over Cartersville’s Madison Ferndon.

The No. 1 doubles duo of Sophia Cheng and Allison Lvovich were the next Lady Bulldogs point. A fairly tight first set went to Cheng and Lvovich 6-4. The second set closed out the match with the Chamblee tandem winning it 6-0 for the second point in the team match.

While the No. 1 singles match between Dayton Flyers signee Neena Katouskas of Chamblee and Cartersville’s Emily Bush was featuring some very long rallies, the No. 3 singles and No. 2 doubles hit the court.

Chamblee’s Lila David and Samantha McCrery only lost one game on the way to a 6-1, 6-0 sweeps of Cartersville’s Sonny Cate Pritchitt and Katie Lewis to seal the match.

The other two matches finished out their play very quickly with Katouskas and Bush going three sets with Katouskas taking a 6-3, 4-6, 6-2 win at No. 1 singles.

Ananya Jatar closed out the No. 3 singles with a 6-2, 6-0 win over Chloe Satterfield. 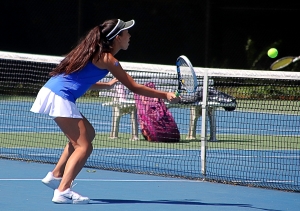 Chamblee’s Sophia Cheng on a return as she and No. 1 doubles partner Allison Lvovich won their match 6-4, 6-0. (Photo by Mark Brock)

Chamblee (16-3) advances to the Elite 8 for the fifth consecutive season and will face the winner of Woodward Academy and Veterans.

In other Sweet 16 tennis action, Lakeside swept a pair of Class 6A state playoff matches on the road at Statesboro on Wednesday afternoon.

The Vikings swept Statesboro 3-0 to improve to 9-2 on the season. Lakeside gets to host No. 3 seeded Cambridge which knocked off No. 1 seed Buford 3-1 to advance to the Elite 8.

Lakeside’s Lady Vikings had a tougher test pulling out a 3-2 victory over the home team to advance to the Elite 8. Lakeside will face the Buford/Centennial winner in the third round.

Two DeKalb teams are involved in Sweet 16 matches on Thursday (April 22). Dunwoody (13-6) continues play in the Class 7A girls state playoffs taking on Alpharetta at Dunwoody High at 4:00 pm. The Tucker Tigers travel to Lakeside-Evans for a 3:00 pm Class 6A boys’ match.

The Chamblee Bulldogs play Friday (April 23) as they take on Grady in a rematch of the 2019 state championship won by the Bulldogs. It will be played at the site of that state title as the two square off at Piedmont Park.